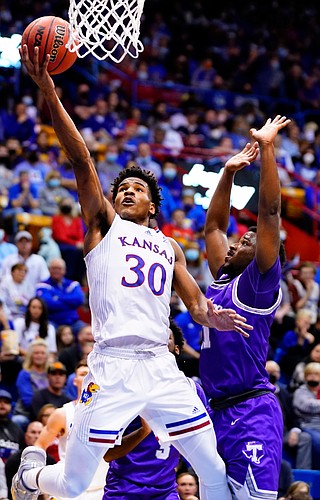 Kansas guard Ochai Agbaji (30) gets in for a bucket past Tarleton State guard Montre Gipson (11) during the first half on Friday, Nov. 12, 2021 at Allen Fieldhouse. by Nick Krug

1 – Ochai Agbaji – Another stellar night offensively, and, for the second game in a row, his big point total came within the flow of what Kansas does on offense, during an 88-62 win over Tarleton State. Agbaji did not hunt his points or shots in this one. Instead, he coolly and calmly knocked in 11 of 16 to finish with 25 for the night.

2 – Christian Braun – Talk about filling up a stat line. 15 points. 8 rebounds. 5 blocks. 5 assists. Those numbers more than made up for the 3 turnovers. Braun’s in the lineup because he competes so hard. Pretty or not, he’s going to give you everything he’s got.

3 – Bobby Pettiford – Kansas coach Bill Self said after that game that the freshman might’ve been the best guard they had on Friday night. If you boil that down to lead guard or the 6-1-and-under crowd, that might’ve been dead on. Pettiford scored just 4 points, but he played 17 minutes and dished 3 assists, with no turnovers, while helping Kansas matchup with the smaller, scrappy Tarleton State bunch.

4 – Remy Martin – Nothing special in the first half, but Martin kept coming. And by game’s end, even on a night when he shot just 3-of-10 from the floor, the KU spark plug finished with 14 points and 6 rebounds while drawing a game-high 5 fouls. All of that in under 30 minutes.

5 – David McCormack – His offense wasn’t pretty, but it was never going to be. Friday’s opponent was always going to swarm McCormack and make life miserable for him. To his credit, he did not force it and tried to find his impact elsewhere. It came on the glass and around the rim, where he grabbed 8 boards and blocked 5 shots in 23 minutes.

6 – Jalen Coleman-Lands – A star pupil on the try-hard chart, Coleman-Lands hit all four shots he took in this one and played big in his 12 minutes, finishing with 10 points and some tough defense.

7 – Dajuan Harris – Harris was harassed in this one the way he often harasses opponents. He finished with just 2 points on 1-of-4 shooting and dished 6 assists, but also turned it over 3 times and was affected by TSU’s team speed.

8 – KJ Adams – The freshman forward got his turn late in the first half and he delivered a follow-dunk and grabbed a couple of rebounds while also affecting things with his athleticism. He only logged 6:38 of game action, but they were meaningful minutes.

9 – Mitch Lightfoot – Lightfoot was solid and steady midway through the first half when KU needed a big man on the floor to calm the waters. He scored in the post almost immediately after entering and also did everything in his power to chase the smaller TSU players around on offense. Tough matchup for both him and McCormack, which is why he was limited to less than 9 minutes.

10 – Joseph Yesufu – This seemed like a game that was tailor-made for Yesufu but he logged just 7:34 of game time and didn’t do a whole lot when he was out there. For the limited time, his 3:1 assist-to-turnover ratio was encouraging.

11 – Zach Clemence – Played just the final 1:17 — again because of the bad matchup for big men — and drilled the only shot he attempted (a 3-pointer), while also dishing an assist.

I disagree with the order. I think Christian should be first, for his all-around game.

Fun times ahead; ahead.