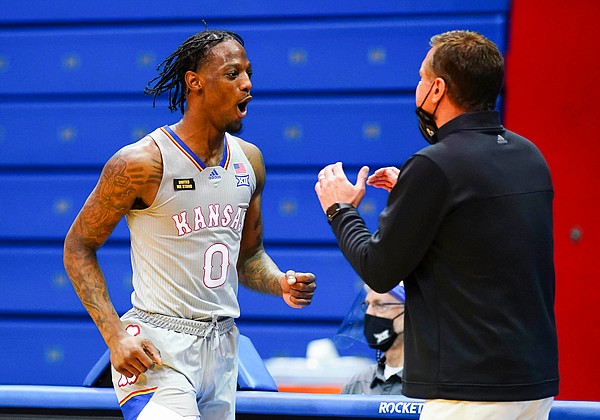 Kansas guard Marcus Garrett (0) and Kansas head coach Bill Self react after being called for a foul during the second half on Thursday, March 4, 2021 at Allen Fieldhouse. by Nick Krug

1 – Marcus Garrett — Pick your poison: Garrett’s lockdown defense of the game’s best player down the stretch when KU had to have it or his huge offensive production late that gave KU its first lead and featured the game-winning shot with 22.4 seconds left. It’s a high bar that Garrett has set for himself, but he reached it on this night to help deliver a huge, grind-it-out, 67-62 win over UTEP.

2 – Dajuan Harris — Bill Self called him the best player in a Kansas uniform on Thursday night, and it’s hard to argue that claim. In a more-than-usual 25 minutes on the floor, Harris was a nightmare for UTEP defensively and also chipped in six points on a night when KU needed every last one it got. Big confidence game for the KU reserve. But it was the two-headed monster with him and Garrett that ultimately allowed Kansas to find a way to win this one, and the potential for that defensive pairing moving forward is awfully intriguing.

3 – Ochai Agbaji — Agbaji hit 7-of-12 from the floor and 3-of-6 from 3-point range, with so many of them coming in the first half to keep UTEP from building an even bigger halftime lead. The junior guard led Kansas with 19 points and chipped in 6 rebounds, as well. He should’ve had 20+ but was just 2-of-5 at the free throw line.

4 – David McCormack — It’s rare to see a player drop a big time double-double of 18 points and 10 rebounds and be so far down in the rankings, but McCormack’s first half was abysmal. Luckily for KU, he flipped the switch in the second half and played at an all-Big 12 level to close the game. The energy and emotion on his face after he flipped the switch was a complete 180 from how he looked throughout his rough first half.

5 – Christian Braun — Braun had a pretty quiet night overall, but his effort was a big key in the second half and he scored two crucial buckets while pushing the pace and forcing UTEP to deal with him attacking the rim. He finished with 6 points and 6 rebounds in 30 minutes.

6 – Mitch Lightfoot — His numbers don’t show it, but Lightfoot played a big chunk of the second half while McCormack was on the bench trying to figure out what he needed to do to help Kansas get over the hump. Lightfoot’s 2 points, 2 boards and a couple of altered shots were bigger than those numbers suggest.

7 – Jalen Wilson — The redshirt freshman just couldn’t quite find anything that worked in this one. His energy was off, he shot just 1-of-7 from the floor (1-of-4 from 3-point range) and spent most of the second half on the bench. It’s not the way he would’ve wanted to get it, but the low-usage night won’t hurt now that Kansas found a way to win.

8 – Bryce Thompson – Played a little sped up at times and shot just 1-of-4 from the floor. As always, though, he competed and was willing to do whatever was necessary to help his team win.

Wilson it appears to me is afraid to make mistakes fearing being jerked from playing. We need a Wilson to win games. Maybe allowing for mistakes and not being punished like a few others have that benefit.

The guy can't even do any other moves rather than straight to the basket and force his layups. No offensive moves at all. Marcus can at least cross over his defender, or try floaters. Wilson has no moves to the basket. This kid and Enaruna have long legs, they can take off anytime to stuff the rim, but instead they move away from the basket. We've got 3 guys that are alergy to rim: Mitch, Wilson, Enaruna. Why can't someone teach Wilson how to do hesitate moves, how to stop & fake, how to switch foot/scissor move, how to spin move, how to swing step, how to step back... so many freakin' moves to the basket....... geeez... How to pull up a J. pull up a J - a basic YMCA scoring drill. Why do we have only 1 or 2 player that can do a pull-up J? Why?? Why coach, why???

It’s always amazing how some commenters presume to be smarter than the real life HOF coach. To Steve’s credit I do recall a recent Ooops I was wrong.

It's call critic, yes and you'll see Dirk, he'll transfer. He's the reason why Tre didn't pick KU. I'm not afraid making mistakes, BTW. I'm not someone who's not afraid to say even HOF coach has flaws either. What's your relation to coach, BTW?