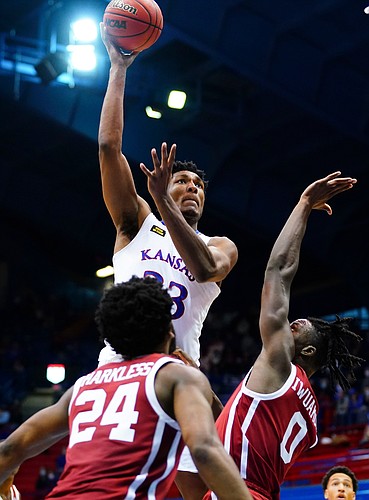 Kansas forward David McCormack (33) turns for a shot over Oklahoma forward Victor Iwuakor (0) during the second half, Saturday, Jan. 9, 2021 at Allen Fieldhouse. by Nick Krug

1 - David McCormack — It was tempting to put McCormack lower because of his lack of rebounds, but that might’ve been a product of the matchup as much as anything. Besides, the KU big man hit 8 of 14 shots, including two of the biggest of the game, and gave Kansas a consistent inside presence that they could throw the ball to throughout the 25 minutes he was out there. McCormack’s starting to stack solid outings up and you can see the impact that’s having on his confidence and comfort level.

2 - Ochai Agbaji — Another solid first half, combined with two smooth 3-pointers early in the second that helped Kansas take control was enough to keep Agbaji near the top of these postgame standings. Finished with 14 points, 6 rebounds and 2 assists in 38 minutes.

3 – Marcus Garrett — His return from a one-game absence was well timed because KU needed all 33 minutes Garrett gave. Most of his contributions were subtle and set things up on the defensive end. But his late, hard-driving reverse layup and rebound and put-back of a McCormack airball were both huge baskets and his final line of 7 points, 5 rebounds, 4 assists, 2 steals and a block resembled the type of line that Garrett has been known for.

4 - Jalen Wilson — Finished with nearly half of KU’s 16 turnovers (7) but made up for it by grabbing nearly a third of KU’s 35 rebounds (11). Add to that the two big 3-pointers he hit late and even in one of his roughest games as a Jayhawk, Wilson nearly delivered a double-double and came up big when it counted most.

5 - Christian Braun — Still can’t quite dial it in from 3-point range (1-of-6 in this one), but he made up for it by competing for 9 rebounds and a couple of assists in 38 minutes.

6 - Mitch Lightfoot — Would’ve been higher if he played more minutes, but he certainly made the most of the ones he got. Made all three field goal attempts he took, got to the free throw line and did a solid job of holding down KU’s interior presence when the bigger McCormack was not out there. It appears that Lightfoot, each time out, is feeling more and more comfortable and confident in his role on this team.

7 - Tristan Enaruna — Got in early again with freshman Bryce Thompson still out and looked engaged right away. He still has lapses and needs to continue to find ways to keep himself turned up, but if this stretch of extended PT — not to mention important minutes — continues, that should come.

8 - Dajuan Harris — A quiet game all in all, which was to be expected with Garrett back. The next step for Harris is to figure out how to consistently impact the game in limited minutes. He’s shown flashes of being able to do that, but isn’t quite consistent with it yet.

9 – Tyon Grant-Foster — Played just 3 minutes, missed his only shot, a 3-pointer, and coughed up a pretty ugly turnover with the first half winding down that led to an OU layup just before the halftime buzzer. KU coach Bill Self took the blame for the sloppy possession/play, but Grant-Foster remains a little ways out from looking comfortable and having a regular role.

David's hook worked out well today, up & under move looked impressive - near perfection!!! And I love the screen and slip!!!!!! Should do that more often.. Too bad our players' passing sucks big time. David did that at least twice. But he got a pass only once.

Yeah, even Garrett doesn't know how to pass leading passes. No one seems to have that mentality. Our passes are so predictable. No offense to David's performance, but this kind of feed the bigs offense might turn off physically elite, agile, athletic recruits. They want run-n-gun type of offense. I was so excited to see good offense vs TCU. Now we're back to stinky offense again. So frustrated watching this kind of basketball. We're much better than this.

Self’s offense is for the guards to put it on the floor and drive/attack. Very simple. Easily defended.

It's a wake up call - B12 is no longer an easy conference for HCBS. Other coaches know how to recruit. They adapt and execute modern plays. If one still thinks KU still sits alone in the throne of B12 kingdom, s/he's delusional.