Even injured, Ochai Agbaji delivers to top ratings after KU's 93-64 win over TCU 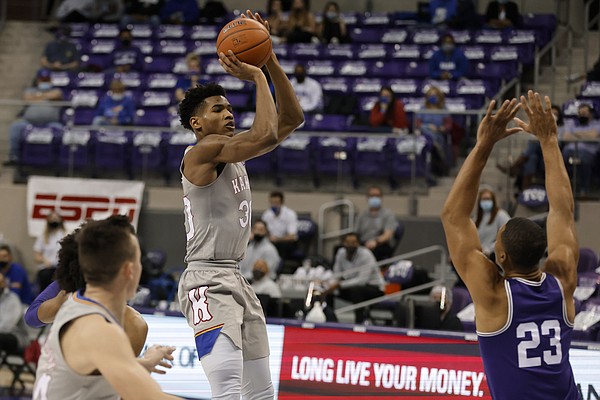 1 - Ochai Agbaji — Playing on an injured hamstring, Agbaji attacked the Horned Frogs early and set the tone for KU’s offensive outburst. The athletic junior scored from 3-point range and above the rim and appeared to have a whole bunch of fun doing both. Finished with 19 points on 7-of-12 shooting, including 3-of-5 from downtown.

2 - Dajuan Harris — Making the start for the injured Marcus Garrett, who did not play, Harris picked up three assists on KU’s first three baskets and finished the night with 7 assists and 7 points and looked steady while running the show for the sixth-ranked Jayhawks.

3 - David McCormack — Strong and decisive in the post and wiling to by physical at the rim, McCormack put together exactly the kind of game the Jayhawks would love to see from him the rest of the season — 20 points, 8 rebounds, 2 blocks. And he looked pretty relaxed and smooth while doing it.

4 - Jalen Wilson — Didn’t shoot it great from the outside, but was solid everywhere else. KU’s leading scorer grabbed 8 rebounds and dished 6 assists to go along with his 16 points on a night when the Jayhawks needed him to do just that. He also played a game-high 35 minutes.

5 - Tristan Enaruna — Set a new career high with 10 points in the first half and finished with 12 points and 7 rebounds for the game. He still had a few careless moments, but his rarely seen confidence and aggressive mentality were on full display throughout this one.

6 - Christian Braun — Braun did his part to bring the defensive intensity early and also had the dunk of the night, a two-handed jam off of a drive through the paint early in the game that also helped set the tone for the night. Chased down a steal with a dead sprint after a Kansas miss late in the second half with his team leading by 22.

7 - Mitch Lightfoot — Brought energy, got on the glass, attacked the rim and wrestled a TCU player to the floor for a loose ball with the Jayhawks up 20+ in the second half. Another lunch-pail-type effort for Lightfoot, who remains a key part of KU’s identity no matter what his numbers look like.

8 – Tyon Grant-Foster — Got a chance early, but gave way when Enaruna proved that he had what it took to play the key scoring role off the bench for the Jayhawks.

9 – Gethro Muscadin — Grabbed a rebound and fouled once in three minutes of mop-up time at the end.

10 – Latrell Jossell — Missed his only shot attempt in three minutes of mop-up time at the end.

That's very true about Tristan. Today he's just rock solid. A couple of correctable mistakes. That walk call was a bull. Regardless, this is Tristan that I've been hoping to watch since last year. I like how he faked his defender and just took off without wasting time. Pretty soon we'll see him dunking all over the court!!!!!!!!!

Ochai's stroke is getting more impressive. He's becoming our marksman.

Harris is our floor general. No doubt. When he contributes in scoring, we'll be unbeatable.

I thought it was great that David attacked to get the and1. He such a good FT shooter, especially for a big, that he should have 5-10 pts off FTs each game.