Garrett takes top spot in ratings after blowout loss at Tennessee because, hey, someone had to 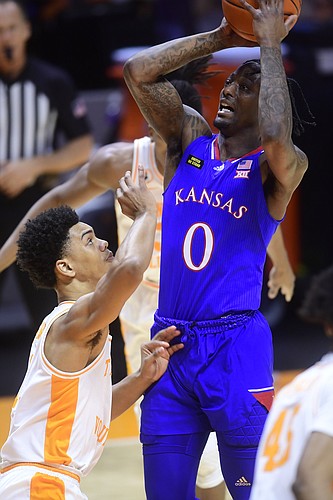 Kansas guard Marcus Garrett (0) shoots as Tennessee guard Jaden Springer (11) defends during a basketball game between the Tennessee Volunteers and the Kansas Jayhawks at Thompson-Boling Arena in Knoxville, Tennessee on Saturday, January 30, 2021. by Tennessee Athletics

1 – Marcus Garrett — Tough to give anyone the top spot after a game like this one, but someone has to get it. Garrett was one of the few Jayhawks who found any kind of success on the offensive end of the first half — even if it wasn’t pretty — and he finished with 15 points, 4 assists and just one turnover.

2 – Tyon Grant-Foster – He’s still a work in progress, but he’s not afraid to attack and showed that he can make plays for himself and his teammates off the bounce. He’ll play more in the weeks ahead, and he should.

3 – David McCormack — Led Kansas with 17 points on 8-of-12 shooting, but grabbed just 2 rebounds in 33 minutes and did nothing to keep the Vols from attacking the rim.

4 – Jalen Wilson — Give him credit for getting on the glass (9 rebounds) and trying to get his teammates going (6 assists). Still can’t find it offensively, though, and he played just 21 minutes off the bench.

5 – Ochai Agbaji — Played hard throughout despite the off shooting night. Finished 1-of-9 from 3-point range and 3-of-12 overall for nine points.

6 – Dajuan Harris — Earned the start and had next to nothing to show for it in 21 minutes. Didn’t shoot, dished one assist and swiped one steal and finished with 3 fouls. As much as we’ve seen games where Harris has made his presence on the floor felt and seen, this was the polar opposite.

7 – Mitch Lightfoot — Scored a bucket and swiped a steal in nine minutes, but not even he seemed to have much energy or tenacity today.

8 – Christian Braun — Missed all four shots he attempted and looked slow and sluggish throughout the game, especially with the ball in his hands on offense. Another rough night that ended with 2 points in 22 minutes.

9 – Tristan Enaruna — Played 11 minutes off the bench but, again, was hard to spot until the final two, when the game was long finished.

10 – Latrell Josseell – Did not record a stat in mop-up time.

10 – Gethro Muscadin – Did not record a stat in mop-up time.

I am starting to feel nothing but sympathy for Christian Braun.

Garrett, good effort on your 'floater' but it's not a floater if you flip your wrist like that - you're not shooting, you need to just PUSH THE BALL UP extending arm upward.

I like your failed fast-break, unfortunately, it's a give-away if swing the ball from left to right when the defender is ON YOUR LEFT, that's instinct, buddy... you should've cross the ball left to right instead, AND ALWAYS PROTECT the ball, meaning, use your body weight and shoulder to push the defender while moving forward, just enough to put the ball into the basket.

I love Braun's gut to dunk the ball, keep doing that!

That's a move that Wilson, Enaruna, Ochai, others have to turn into habits. Even if you miss, you'll get to shoot FT!!!

I don't care if McCormack scores 20-30 in a game. With his habits shooting jumpers at low-post, those shots are not consistent. I don't know why feeding him if in the end he's shooting jumpers. He's that close to the basket, he needs to do low-post moves like a BIG MAN should do. Even the Vols' big shows nice nifty up & under moves.

I see a lot of opportunities to score had Garrett passes the ball quicker, or pass a leading pass or bounce pass. It's so sad. So sad.

Obviously, there’s lots more going on with this team, but it really makes me wonder when even Mitch is low energy.