KU junior David McCormack does enough, inside and out, to help Kansas survive, take top spot in ratings 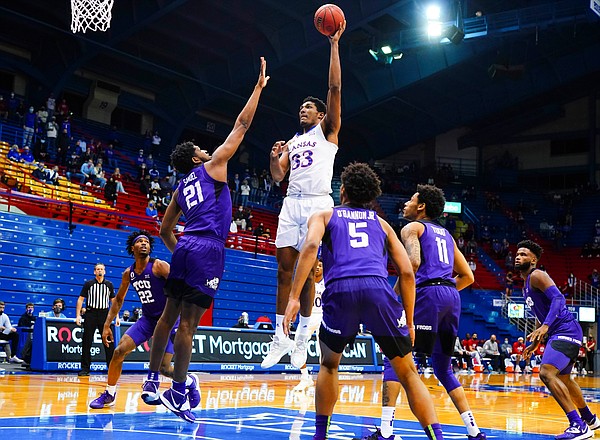 Kansas forward David McCormack (33) turns to put up a shot in the paint over TCU center Kevin Samuel (21) during the first half on Thursday, Jan. 28, 2021 at Allen Fieldhouse. by Nick Krug

1 – David McCormack — Even if that late-clock 3-pointer had not gone in, this was a pretty solid outing for McCormack. He missed a few too many in close early on, but recovered nicely and did work on the boards, as well, grabbing six rebounds total and four on the offensive glass to go along with a team-high 15 points.

2 – Tyon Grant-Foster – Coughed it up a couple of times on careless plays, but there’s no downplaying the spark he gave this team as a second-half starter off the bench after not playing a single minute in the first half. It will be interesting to see what this does for his confidence — and KU coach Bill Self’s confidence in him — the rest of the way.

3 – Marcus Garrett — He still turned it over far too often (4), but it’s clear that putting Dajuan Harris on the floor makes Garrett a better player. Chipped in eight points, seven rebounds and two assists in 34 minutes of tough-minded basketball.

4 – Ochai Agbaji — There’s nothing pretty about his shooting line — 5-of-14 overall and 2-of-9 from 3-point range — but Agbaji hit a couple of tough shots when no one else in a Kansas uniform was making them and he played tough defense and dished four assists.

5 – Dajuan Harris — Played 12 minutes in the first half and made a clear impact in the game. He started the second half and put an even bigger mark on things with seven points, three assists, three steals and no turnovers.

6 – Mitch Lightfoot — You know Lightfoot will battle. And he did that plenty of times in this one, both as a scorer and on the glass, even if he didn’t wind up with any points or the ball. Two points, four rebounds, four fouls and a few blocks in 14 minutes is the quintessential Mitch Lightfoot line.

7 – Christian Braun — Was pretty quiet offensively for most of the night, but hit a big 3-pointer in the second half and finished with five points and five rebounds in 27 minutes. Not the kind of production KU wants or needs from one of its primary options. But the line at least shows he did not check out.

8 – Jalen Wilson — Wilson continues to struggle shooting the ball. In this one, he missed all six field goal attempts, including three from 3-point range and a few in close on hard drives to the rim. Those were going in earlier in the season. And even though the aggressive mindset to take the shot is clearly still there, Wilson needs something good to happen sometime soon.

9 – Tristan Enaruna — Played just four minutes, yielding most of his time to Grant-Foster and Harris.

I think Harris deserved to be third, not fifth. He had tremendous energy and really helped to turn things around, with one hustle play after another.

I hope that they piped in some Benny Hill music to accompany our inept play.

Jalen Wilson's body language concerns me. He definitely has elite talent and athleticism, but his body language through his struggles suggests to me that he doesn't just expect more of himself. It looks to me like he wants to be THE GUY and is trying too hard to be that guy. Earlier articles have mentioned his offseason work and his mindset going into the season, but I think he's hurting his game by trying to do more than he needs to. I'd love to see him just let the game come to him instead of forcing his offense when things aren't going right. It'll come, JW! Make up for disappointments on O by playing tougher on D! Good things will happen!

Darrel - It seems that your last line is something that Coach has talked about a lot over the years as well as recently. I’m not sure if he would entirely agree with your earlier assessment. He has commented a shot being good or bad irrelevant of whether the shot goes in or not, and staying in attack mode pretty much regardless. One of the things that was fascinating last summer IMO was reviewing film with him of some of the classic games of the past and hearing his analysis including times when good O or D didn’t produce good results or the opposite; “we got lucky here”.

I don't know what athleticism people see in Wilson. He's not athletic. Period. The guy dragging his legs to the basket. He reminds me of Dedric. But at least Dedric can shoot jumpers like crazy. Wilson has heavy legs. Can't jump. Or reluctant to jump. Just like Enaruna. What a waste of long legs. If only these guys taught how to approach the basket with different paces, different styles (hop step, hop cross, etc... etc...), maaaaan.... we don't need to labor on offense every game. These two guys move to the basket in a very predictable way. And the result is always the same. Wilson doesn't even look at the basket, doesn't even initiate contact. They just waste possessions. They always end up moving so deep away from the basket. Their layups are qualified as YMCA layups. An embarrassment to coaching staff and KU MBB program. Seriously. Pathetic.