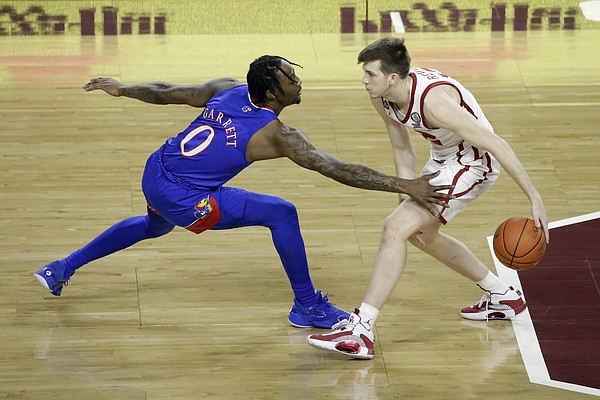 1 – Marcus Garrett — Garrett’s found his offense again, knocking in 3 of 5 3-pointers, grabbing 12 rebounds and scoring 21 points to lead Kansas during Saturday's 75-68 loss at Oklahoma. And, defensively, he did a lot of the things you’d expect him to do. He wasn’t perfect, but KU would’ve been run out of the gym without him.

2 – Mitch Lightfoot — Lightfoot had arguably the best second half of any player in the game. He scored in the post with both hands, dished a nice dime to a cutting Wilson for two more points and hammered home an emphatic, two-handed dunk while bringing his usual energy and toughness to the floor. Finished with 6 points and 3 rebounds in 11 minutes.

3 – Jalen Wilson — This was a weird game for Wilson. After a hot start, he cooled considerably and finished the game without a rebound. Still, he score 13 points on 5-of-7 shooting and helped Kansas finally get out to a fast start again.

4 – Dajuan Harris — The redshirt freshman point guard, who played some with Garrett on the floor, tallied 5 points and 4 assists in 21 minutes and had moments where he showed the kind of impact he can have on the game and this Kansas offense. He’s still not a weapon that opponents fear, which hurts KU’s offense, but he was aggressive in looking to score and gave this team what he could while he was out there.

5 – Ochai Agbaji — Made just three of eight field goal attempts and turned it over four times in 33 minutes. He even missed a couple of free throws, further hammering home the point that it just wasn’t Agbaji’s day.

6 – David McCormack — Stop me if you’ve heard this one before: McCormack looked good at times and bad at others. His 10 points came on 4-of-10 shooting. And he dished four assists. But he played just 17 minutes and missed far too many easy ones inside.

7 – Christian Braun — Two points on 0-for-5 shooting with one rebound and one assist is not the kind of production you hope to get from a guy who was on the floor for 33 minutes.

8 – Tristan Enaruna — Had a golden opportunity to step up and play a bigger role with Braun and Agbaji struggling, but did not grasp it. Missed all three shots he attempted in just 12 minutes.

9 – Tyon Grant-Foster – KU coach Bill Self talked this week about wanting to get Grant-Foster in the game more. And he did. But the juco transfer, who misfired on the two 3-point tries he attempted, wound up in his usual role of single-digit minutes and did not make much of an impact when he was out there.

With his poor play and turnovers at really bad moments, I think he broke even. He only was given 3 turnovers but he was the reason for a lot more and consistently slows down our offense. Take a look at the people he is guarding. If he does stop them from scoring, his guys are getting the easy passes of to assist in scoring. One of our best games yet is when he was out for the game.

Don't agree entirely. Garrett does slow down offense and he tends to hog the ball.
Bigger question is what is going on with Braun, he is very inconsistent, and it may get him out of starting lineup. Wilson played a little better today. We need to get him the ball in the post, maybe sub Wilson and McCormack more. They don't seem to play really well together.

Teams with quick guards seem to be a problem for Wilson to guard. He was embarassed 2 or 3 times when it mattered.

i think we might be better if we just stopped taking any 3s that are not wide open and rive it hard to basket, sometimes just pull up and take 8 to 10 foot shot. Also, Teams are backing off Harris, because he is not much of an offensive threat. This team is one of the worst ones in the last 10 years, I'm not sure it is as good as the Grimes, Dotson team even.

Next year we will have to bring in someone who is really an offensive threat and can play defense. This year Thompson a 5 star recruit, never got going, and Foster-Grant just has not played up to his billing. If that is how the recruits turn out next year we could be in big trouble.

Certainly the NCAA issues are hurting our recruiting. We need Thompson to play point next year, or bring in a high level point guard.

Yep, couldn't agree more with your take on: ..we might be better if we just stopped taking any 3s that are not wide open and rive it hard to basket, sometimes just pull up.. Also I have a feeling coach asks kids to do layups because he thinks that's higher percentage, but he doesn't realize most teams are more athletic than his team. We'll see more pts off of layups, only if they're done the right way - not just a "layup". I don't know if we're qualified as a basketball team without shooting any jumpers, really...

Good teams, players set screen for each other, AND TAKE ADVANTAGE OF THE SCREEN. Our team, screens are set just so that players can get from point A to point B which then ending up passing to another player on the perimeter. How often do we see players puts up a J off a screen? How often do we see leading passes? Bouncing passes? Slip screen can be very effective and help us in scoring, didn't see any today. Put these players together, with the right coaching, we can win more games without laboring on offense. Right now, every team we play seems like good defensive team because our offense sucks. If our 3s don't fall, we have thin scoring.

That's why the team needs to do more like they did today:

more cuttings (Harris to MG) instead of just standing outside, screening for layups (Mitch's pass to JW), play with eyes open with interior passing (Harris to Mitch), layups with better finishing moves (https://tinyurl.com/y22zuwrl), we will definitely have a better season.

This just dealt with offense but it was KU’s pitiful defense that lost the game. OU had no trouble scoring on the Jayhawks and managed to get KU to foul aplenty so the Sooners spent the second half shooting foul shots. This is Self’s worst defense EVER!