Christian Braun's hot first half leads to top spot in 77-69 Kansas loss at No. 2 Baylor 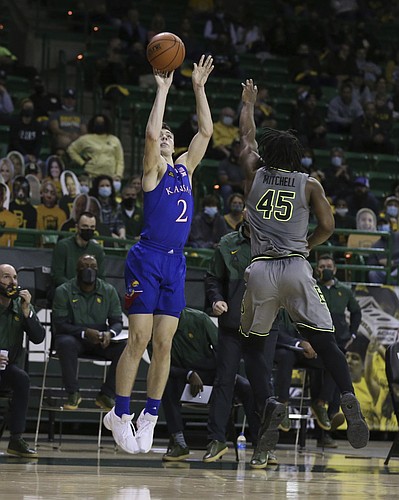 1 – Christian Braun — The lid came off of the basket in major fashion for KU’s sophomore shooter, who knocked in four triples in the first half of Monday's 77-69 loss at Baylor and finished the night 5-of-6 from 3-point range. He also grabbed four rebounds, dished an assist and did not turn it over in 36 minutes. Braun needed a game like this and Kansas needed him to have one.

2 – Ochai Agbaji — After an uncharacteristically quiet first half, KU’s leading scorer got going in the second half, knocking in three 3-pointers, throwing down a couple of big time dunks and helping KU’s defense get stops that sparked a comeback. Agbaji finished with 16 points in 30 minutes.

3 – Mitch Lightfoot — Lightfoot punished the rim whenever he could and also scored in the post. He wasn’t without his miscues in this one, but his effort and energy were right where they needed to be and he finished with 8 points and 4 rebounds in 17 minutes.

4 – Marcus Garrett — The five turnovers is the thing that jumps off the page at you when you look at the stat sheet. Other than that, 9 points and 8 assists with 3 rebounds on 3-of-6 shooting sounds like a pretty nice night. Garrett has to be better handling the ball for this team to reach its ceiling.

5 - Jalen Wilson — His emphatic dunk late and five rebounds show that he never checked out of this one. But another low-scoring game from Wilson (4 points on 2-of-7 shooting in 23 minutes) is the latest indication that the redshirt freshman is not playing with the same confidence and freedom he did to open the season.

6 – Dajuan Harris — Harris played 20 minutes and had some good moments. But if he’s going to be out there that much, he has to do more than 2 points, 1 rebound, 1 assist and 1 steal. Numbers like that make the 1 turnover a much bigger deal than it was.

7 - Tristan Enaruna — He flashed again, with a nice drive and floater late in the game, but that was his only make in three attempts on a night when he played 18 minutes. His confidence has to grow first in order for KU to expect more from him, but this team sure could use him.

8 – David McCormack — An off night from the jump. McCormack slip-slided his way to 6 points and 2 rebounds to go along with 4 turnovers and 4 fouls in 20 minutes. His two early fouls, which came in the first 2:58 of the game, weren’t even the worst part of McCormack’s start.

Butler showed the Jayhawks what a basketball player looks like. Too bad Dotson didn’t return - he would have been able to nullify Butler’s game.

Garrett is better off the ball, we all know that and I think Bill Self has even acknowledged that. But please tell me who else is suited to run the point outside of Harris.... I'll wait. As far as can't defend DUDE get that hate crust out of your eyes. Is he as lethal as last year defensively..... no, but he's also running the point and is THE guy and some of those responsibilities were held by others last year so that Marcus could focus on lockdown D. I'm sure he'd tell you how disappointed in himself he is and he's not Dot, but we all knew that he wouldn't be. We've been spoiled the last several years at the point. We can't be ranked #1 every year and this years team is still a decent team. We have some deficiencies and there are good teams in the Big 12. I will cheer these guys on either way, because that's what a true fan does. Only 1 team ends the year with a win and this year it most likely won't be us. We're still better than Puke, The Mildcats (Kentucky and KSU) or Stuck in the Tar Heels!!!!

Teahan should be 4th. I don't care if he only played scrub minutes. He kept the loss to single digits.