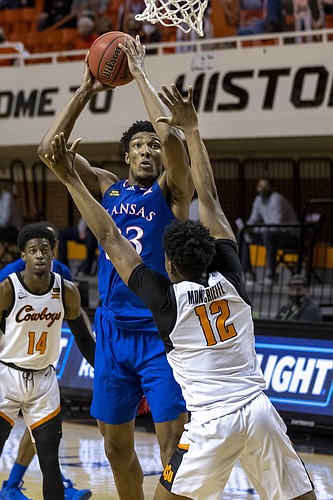 1 – David McCormack — It wasn’t always pretty and he might have become a little trigger happy in the first half, but the KU big man delivered a monster line of 24 points and 12 rebounds while providing Kansas with the closest thing it got to a consistent effort on both ends all night. Like his teammates, McCormack had some bad moments in this one. But it’s hard to argue with that kind of production.

2 – Ochai Agbaji — The KU junior looked so smooth in the game’s early going, proving yet again that his retooled outside shot is a bona fide weapon. He also did an admirable job defending OSU star Cade Cunningham and played 37 minutes of a tough game. The only time he sat, with two fouls in the first half, proved to be problematic for Kansas, further underscoring Agbaji’s importance to this team and on this night.

3 – Marcus Garrett — The standard for Garrett is so high that when he has even a rough stretch it seems to be magnified. That was the case on Tuesday night, when the KU senior turned it over three times and dished just three assists. He did, however, play a huge role in KU’s near comeback and score three times late to help Kansas take a three-point lead into the final 80 seconds.

4 – Christian Braun — A quiet night for Braun featured three made field goals and seven points and he continued to struggle to find his outside shot, going 1-for-4 from 3-point range. The one was a big one, though, and his 25 minutes on the floor showed his value.

5 – Mitch Lightfoot — Mitch Lightfoot continues to do whatever’s asked of him. He only played eight minutes in this one, but he did not make many, if any, mistakes while he was in there. Scored an and-one bucket in the second half, grabbed a board and blocked a shot. All things you expect from Lightfoot and all things he continues to be willing to do regardless of how much playing time he gets.

6 - Tristan Enaruna — Had a bad turnover in the second half, but responded with two quick baskets that helped spark KU’s 21-2 run. The first came on a tip-in, with Enaruna getting active on the offensive glass. And the second came from the high post against the OSU zone, when he caught it in the middle, make a quick and decisive move and scored an easy bucket with his left hand. More of that will be imperative now that Thompson is likely out a while longer because of a broken finger.

7 – Bryce Thompson — Returned to action after a three-game absence and delivered a mixed bag of good and bad. His rust was evident. And he didn’t have his shot either. But he reminded Kansas fans, in limited minutes, of just how willing he is to compete and play hard no matter what it looks like. After diving on the floor for a loose ball late in the second half, he suffered what KU coach Bill Self said was a broken finger on his right hand. It remains to be seen how long Thompson will be out, but it could be another significant period of time.

8 - Jalen Wilson — Logged an eye-popping -17 on the stat sheet and struggled to get going for the second game in a row. This time, there was no late surge to save his outing. Wilson, who finished with 4 points on 2-of-7 shooting in 32 minutes has now turned it over 10 times in his past two games combined. Kansas has got to find a way to get him going again.

9 – Dajuan Harris — Played just six minutes and was never much of a factor, despite this time of game and team being one that would seem to be a good matchup for the young Harris.

10 – Tyon Grant-Foster — Self said Grant-Foster told him he injured his shoulder during the one minute he was in the game. Self had no more details on the potential injury after the game and the only other thing Grant-Foster had to show for his first trip to Stillwater was a turnover.