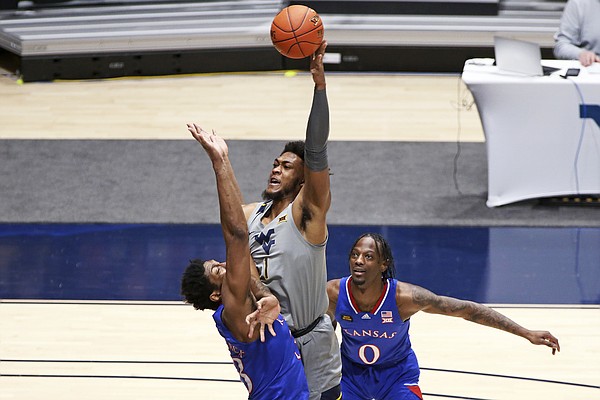 1 – David McCormack — His defensive production was hit and miss, but McCormack’s effort and energy on the glass and as an offensive threat were both pretty good. He missed a couple of close ones early that helped set the tone for the rough first half. But it wasn’t for lack of trying. McCormacked finished one rebound shy of another double-double and recorded 17 points and 9 rebounds, six of them on the offensive end.

2 – Jalen Wilson — Finally looked more like the player we saw in the first couple of months of the season and had the stats to back it up. Finished with 16 points and 14 rebounds (5 offensive) and hit 6 of 13 shots while aggressively driving to the rim and either scoring, getting fouled or kicking to open shooters. KU needs this type of game to be the norm for Wilson the rest of the way. And he still needs to find a way to become a better defender.

3 – Ochai Agbaji — Hit some crucial shots and played 39 minutes while trying to guard WVU’s Miles McBride for a good chunk of the time. Outside of his 13 points on 5-of-11 shooting (3-of-6 3-pointers) Agbaji didn’t do much else on the stat sheet. And he did have a careless turnover in the first half that contributed to KU’s 10-point halftime hole. But he did what he has done also season and did it well. He just needs more help.

4 – Christian Braun — Nobody embodied the kind of effort KU was willing to give on Saturday better than Braun, who was all over the floor for loose balls and attacked whenever possible. He missed a couple of shots that were way off the mark and also missed a couple of close ones. West Virginia’s D and style had something to do with that, though. The Jayhawks would be in much better shape if everyone decided to play with the kind of intensity and effort Braun gave in this one.

5 – Marcus Garrett — Missed a breakaway layup and turned it over three times, but still finished with 18 points on 7-of-14 shooting in 33 minutes. Hard to argue with those numbers. Garrett needs help defensively and he’s just not getting enough of it.

6 – Mitch Lightfoot — No real flashy numbers to report, but the charge he drew on WVU’s Derek Culver, which took a basket away from the Mountaineers and put Culver on the bench with 3 fouls was huge at the time. KU just couldn’t do enough to capitalize.

7 – Tristan Enaruna — Played a part in KU going to a five-guard lineup for 7 or so minutes in the first half and actually looked pretty active in it. But he played just 9 minutes total and finished with 2 rebounds and 4 points, two of which came on a meaningless basket in the final 20 seconds.

8 – Dajuan Harris — Finished with 2 turnovers in nine minutes and wasn’t quite ready for this type of game. The official book says no assists, but he should’ve been given one for the lob he threw to McCormack that cut the WVU lead to 57-55. McCormack missed the free throw on the would-be three-point play.

This is all about the offense. Where was the defense that allowed 91 points?

Self said it himself: No one guarded. So no one can be rewarded or penalized any more than anyone else in these rankings for how they played (or didn't play) defense. That's not always the case, but it definitely was in this one.