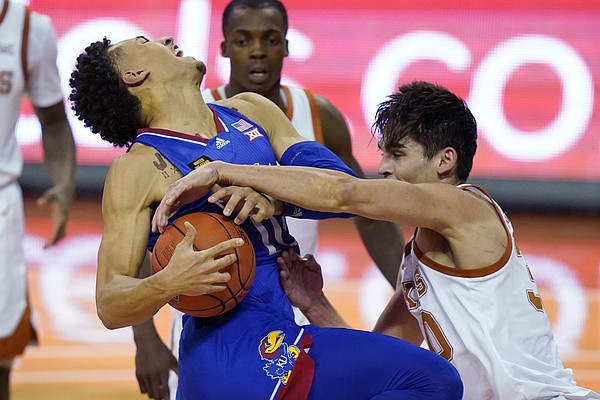 Kansas forward Jalen Wilson is fouled by Texas forward Brock Cunningham, right, while driving to the basket during the second half of an NCAA college basketball game, Tuesday, Feb. 23, 2021, in Austin, Texas. (AP Photo/Eric Gay)

1 – Jalen Wilson — I’m not interested in crushing Wilson for that fumble out of bounds on the late layup attempt that would have tied it in OT simply because I’m not sure he would’ve ever got the shot to the rim. Kai Jones was closing hard and had a good angle on Wilson, so it’s easy to see how his length could have erased the would-be game-tying shot. Either way, that was one of the only poor moments for the KU freshman in Tuesday's 75-72 OT loss at Texas. He picked up yet another double-double, rebounded like a monster and hit a few big shots inside and out.

2 – Ochai Agbaji — Red hot in the first half, Agbaji was equally as cold in the second half and that hurt KU’s offense. He missed three of four 3-pointers he tried in the second half, but his biggest miss was an off-balance shot near the paint that he probably never should’ve attempted. Still, without Agbaji’s hot hand in the first half, KU would’ve found things much tougher and his 5-of-11 showing from 3-point range came at a great time and helped end a mini-drought of sorts for the KU junior.

3 – Bryce Thompson – The freshman played arguably the best stretch of any player in this game during the first half, scoring at will on both mid-range jumpers and breakaway dunks. He still looked a little scattered at times and did not play nearly as well in the second half (see: 5 minutes), but if what he delivered in the first half is something he and Kansas can tap into more, he’s going to be a huge factor in the postseason.

4 – Christian Braun — Played 39 minutes and probably feels like he played 100. Braun was all over the place in this one, diving on the floor, hitting the glass and defending like his life depended on it. He finished with 10 points on 4-of-7 shooting and hit 2-of-4 from 3-point range while also adding 5 rebounds, 3 assists, 2 blocks and 2 steals to go along with just 1 turnover.

5 – Marcus Garrett — His 2-of-12 shooting night will indicate that it was a rough night. But Garrett was good with the ball (1 turnover) and helped keep the Kansas offense on track even with his shot not falling. I’m sure he’s got a couple of shots in mind that he’d like to have back. And if even just one or two of those had fallen, Kansas may have got out of Austin with a win.

6 – David McCormack — Fouled out in just 24 minutes and also missed two free throws to go along with two turnovers. McCormack had a couple of key buckets — a tough one in OT and the game-tying basket at the end of regulation — but, overall, this was a pretty forgettable night for the KU big man, just like the last one he played against UT’s nightmare front line.

7 – Dajuan Harris — The final line says he didn’t do much, and his three misses and zero makes definitely underscored the issues with having him on the floor. But he was out there during that first-half run when KU played its best so the line does not tell the full story. Still, KU has to find a way to get more from Harris, even if it just means more assists to get easy baskets for his teammates.

8 – Mitch Lightfoot — Played just 5 minutes and had a nice tip-in and a block in the first half. But he offered next to no resistance to the dunk party the Longhorns waged throughout the game and the Jayhawks went small instead.

If Jalen's oops had happened in the first half it wouldn't even be remembered other than maybe in an obscure highlight video. His overall performance deserves applause and appreciation. Same for several other players, too. It was a hard fought game, well played for the most part. Now, let's get Baylor! If lowly K-State can beat #7 Oklahoma, then we can beat Baylor at our place.