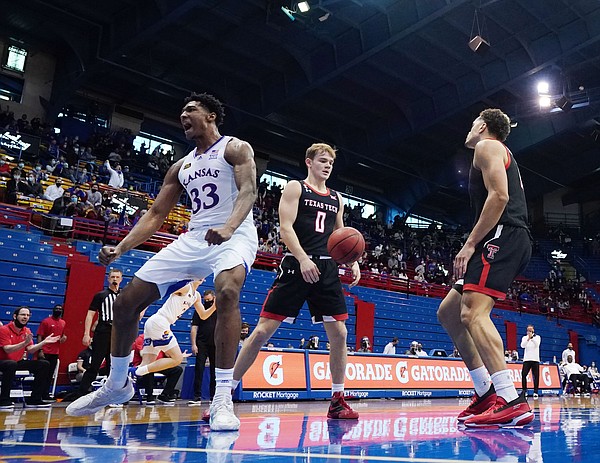 1 – David McCormack — Terrific from the start, McCormack made his first seven shots, set the tone for KU's 67-61 win over No. 15 Texas Tech on both ends of the floor and played both with passion and control throughout most of the game. It all resulted in a terrific start for the Jayhawks and 17 points for McCormack.

2 – Jalen Wilson — Another double-double for Wilson (11 points, 11 rebounds), who has fully found his game again and is playing even better today than he was during his hot start in December. A big reason for that is his willingness to compete defensively and attack on offense.

3 – Marcus Garrett — At one point during the second half, I was pretty sure that Garrett was the best player on the floor for the Jayhawks today. And at times he was. Most of what made it that way was his ability to do things that do not show up in the box score. More on that in a blog later this weekend. Garrett was great in so many aspects and is a calming influence with his experience and demeanor.

4 – Christian Braun — His game-clinching 3-pointer with 21 seconds to play is what people will remember, but he did so much more than that in his 38 minutes on the floor on Saturday. All of it came from his desire to out-compete the opponent. He battled on the glass, defended and kept pulling the trigger from 3-point range (2-of-10) even when his shot wasn’t falling. That led to the big make at the end, which made it much easier to see how important Braun was to this victory.

5 – Ochai Agbaji — Agbaji made 3-of-8 from outside and flushed a ridiculously difficult reverse lob to give the Kansas offense a spark. It wasn’t his best shooting day and he didn’t play his best defense either. But he made some plays in timely moments that helped KU maintain control and pick up a huge victory.

6 – Dajuan Harris — Dropped four assists against zero turnovers while taking on one of the toughest defenses in the country. Kansas coach Bill Self recently asked Harris to be more aggressive offensively and the redshirt freshman responded by doing just that.

7 – Bryce Thompson – His up-and-under reverse layup was spectacular and the big shot he hit from the top of the key put Kansas up nine late in the first half. He missed the six other shots he attempted, which hurt his offensive production numbers. But in terms of competing, defending and rebounding, this was another step forward for the freshman who’s still coming back from a pair of injuries that forced him out of the lineup for lengthy periods of time.

8 – Mitch Lightfoot — Played just five minutes and didn’t do a whole lot on the stat sheet. He was out there long enough to draw his team-leading 13th charge of the season, which is one of the stats — outside of winning — that Lightfoot cares most about.

Kansas coach Bill Self on what stood out about 67-61 win over Texas Tech by KUsports.com

David McCormack after leading Jayhawks with 17 points against Red Raiders by KUsports.com

KU's Jalen Wilson on importance of rebounding after win over Texas Tech by KUsports.com

I fully expect Bryce to make some huge plays in the tournament, a la Cole Aldrich against UNC.

It's amazing how good Mitch is at drawing charges, especially given how few minutes he plays.

Cudos to the D. The Hawks made some mistakes but defense clearly won this game.

So apropos that Mitch would lead in taking charges. Just love it.