Braun breaks through to lead Kansas past Kansas State, 74-51 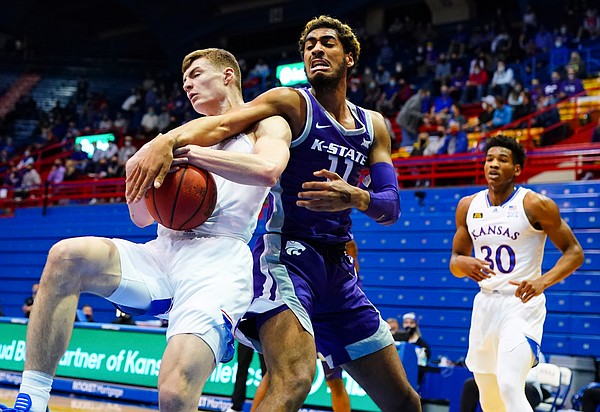 Kansas guard Christian Braun (2) pulls a rebound away from Kansas State forward Antonio Gordon (11) during the first half on Tuesday, Feb. 2, 2021 at Allen Fieldhouse. by Nick Krug

1 – Christian Braun — There’s just something about the Wildcats that Braun seems to like. After struggling for the past couple of weeks, Braun found his scoring touch again and did it early, knocking in 4-of-9 from 3-point range and 6-of-11 overall for 18 points in 31 minutes to help Kansas knock off Kansas State, 74-51 at Allen Fieldhouse.

2 – David McCormack — McCormack was a man possessed in the second half. And he did a good job of getting going early, too. He finished with his fourth double-double of the season and showed why so many on his team expected him to be so good this season.

3 – Ochai Agbaji — Agbaji was back to being the steady but unspectacular leading scorer on Tuesday night. He finished with 15 points, hit a couple of 3-pointers and played a big role in getting KU off to a good start. From there, he let his teammates bring it home.

4 – Tristan Enaruna — His activity level was terrific, especially on the glass and on defense. He didn’t do much offensively, but his defense definitely helped him stand out.

5 – Jalen Wilson — He was better. And his hot start to the second half was what Kansas fans — and likely Wilson — have been waiting to see. He still shot a rough percentage and played a bit too sped up — trying too hard at times — to consider this a great night.

6 – Mitch Lightfoot — Worked hard for every rebound he could even get close to and also appeared to be aggressive on offense, looking to score when he could and attacking the glass looking for tip-ins, as well.

7 – Marcus Garrett — Garrett didn’t do anything on offense, but KU didn’t need him to. He did chip in with 6 rebounds and 5 assists in 24 minutes, but, much to his liking, several of his teammates had better nights.

8 – Dajuan Harris — Tallied 5 assists and 2 rebounds in 21 minutes, playing solid at times and a little crazy at others.

9 – Tyon Grant-Foster – His lack of defensive effort and intensity cost him minutes and he never really got a chance to make an impact as result.

10 – Latrell Josseell – Grabbed 1 rebound and missed his only shot attempt in 2 minutes of mop-up time at the end.

Christian Braun, David McCormack & Bill Self meet with the media after 74-51 win over K-State by KUsports.com

Braun should challenge Wilson & Enaruna in number of dunks per game. These two lazy tall guys are so useless when 'attacking' the basket. Forget about Garrett. Been giving him 2 years. He still doesn't know how to drive and dunk except that one fastbreak. He misses a lot of opportunities on interior passing. Agbaji should be dunking more like that from the center lane. He shows the team how to take care of driving business.

Jossell gets one rebound and makes the list. Teahan makes a 3 (again) - Where's his name?