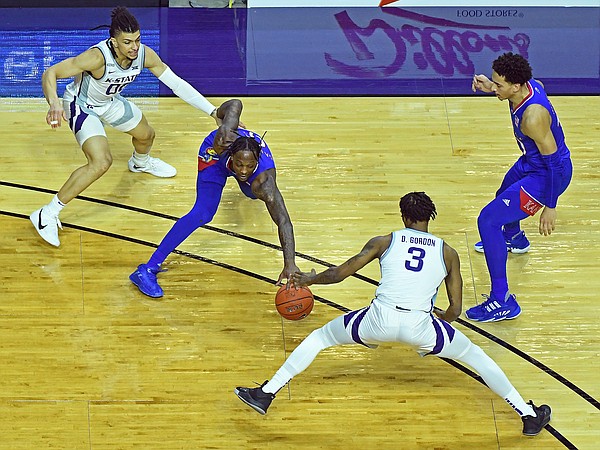 KU senior Marcus Garrett attempts to make a move through defenders during a game against K-State at Bramlage Coliseum in Manhattan, Kansas on February 17, 2021. by Scott Weaver

1 – Marcus Garrett — Garrett’s defense was the key to this ranking. And it didn’t hurt that he led all scorers with 14 points. Even when he didn’t record a stat off his defensive prowess, his quick hands and relentless ball pressure made life miserable for the Wildcats’ guards. And, hey, he was one of the rare players who got a 3-pointer to go down in this one. In fact, he was the only player on either team to hit 2 triples.

2 – Jalen Wilson — Wilson again set the tone for the game by being the Jayhawks’ best player in the first half. He didn’t do much in the second half, but the rest of his teammates stepped in to fill the void. The redshirt freshman finished one rebound shy of his fifth consecutive double-double with 11 points and 9 rebounds.

3 – Bryce Thompson – The freshman made a major impact in the second half, scoring six points on 3-of-4 shooting and dishing a sweet dime to David McCormack for an alley-oop that put the game on ice.

4 – Ochai Agbaji — Not his best night offensively, but he still managed to make an impact with the buckets he did get and finished with 9 points, 5 rebounds and a steal in 33 minutes. The fact that he was out there that long in an 18-point win tells you everything you need to know about what Kansas coach Bill Self thought of his night.

5 – Mitch Lightfoot — Scored 4 points and grabbed 3 rebounds while doing his typical junkyard dog dance. But Lightfoot’s 2 drawn charges — and Self said he should’ve had a third one — were big momentum plays. In 14 minutes, Lightfoot gave Kansas all it could want in terms of energy, effort and attitude. He even peeked into the crowd a couple of times to have some fun with the K-State students on hand.

6 – Dajuan Harris — Two assists and three steals in 10 minutes are numbers KU would not mind getting used to. Self said after the game that he thinks Harris should still look to score more. But he doesn’t need to do it so much that it takes him away from his strengths, which were on full display in this one.

7 – David McCormack — Finished with 8 points and 4 rebounds and had a couple of memorable baskets. But he also turned it over three times and took some ill-advised shots that bailed out the K-State defense. As always, his confidence and effort were worthy of high grades. But his execution and production lagged a little in this one. This was just the fifth time in Big 12 play this season that McCormack failed to reach double digits in scoring.

8 – Christian Braun — Missed three shots, including both of his 3-point attempts, and turned it over twice while also missing 50% of the free throws he attempted. He was aggressive at times, but also looked a little gunshy after a couple of bad turnovers early.

9 – Tristan Enaruna — Gets the nod here among a bunch of also-rans simply because he played 4 minutes and first checked in during the first half. Missed his only shot and was not a factor on either end.

T10 – Tyon Grant-Foster — Did not record any statistics in one minute of mop-up duty.

T10 – Gethro Muscadin – Did not record any statistics in one minute of mop-up duty.

T10 – Latrell Jossell – Did not record any statistics in one minute of mop-up duty.

Matt, seems that you hate Teahan. He went in with all the other 1-minuters. Yet you never mention him.

I love Chris. Great dude and a great family. But these rankings, going way back, have always been of the team's scholarship players and Teahan's a walk-on. That's why he's never mentioned.