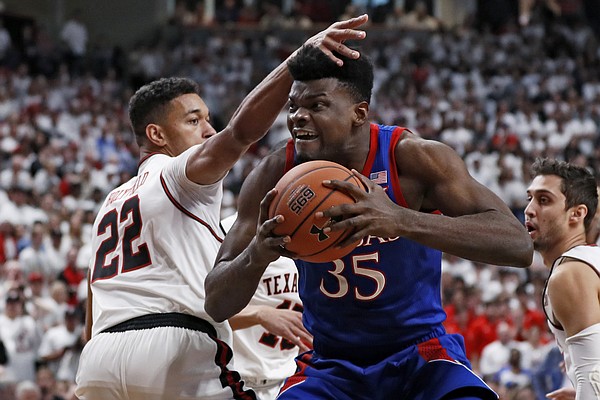 1 – Udoka Azubuike – Texas Tech made it hard for KU to get Azubuike the ball, but his numbers did not reflect that. He finished with 15 points and 11 rebounds and helped KU dominate Tech, 38-16, in points in the paint. It wasn’t quite the monster showing that Azubuike has shown in recent weeks, but it was another double-double and another KU win.

2 – Devon Dotson – Shot just 5-of-16 from the floor, but hit four clutch free throws and grabbed 7 rebounds while dishing 5 assists. So many of those misses led to Azubuike points that they might as well have counted as assists, too.

3 – Marcus Garrett – His tough shot in the final minute was as big as any in the game. And his defense on Jah’mius Ramsey might have been the most impressive part of anybody’s game on Saturday. Oh, yeah, and Garrett did all of it while battling through that foot injury.

4 – Ochai Agbaji – Didn’t find much luck with his shot but also didn’t let that stop him from making an impact. Finished with 12 points and 6 rebounds on 5-of-13 shooting in 37 minutes.

5 – Christian Braun – Guaranteed himself a spot in the top five for the late steal and transition bucket alone. After the game, before talking with reporters outside the KU locker room, Kansas coach Bill Self joked, “Guy makes two shots and the media wants to talk to him.” One of those two shots was that big.

6 – David McCormack – The 7 rebounds (3 offensive) made up for the 1-of-5 shooting clip. Played incredibly hard in his 11 minutes on the floor and seems to have settled nicely into the role as Azubuike’s back-up.

7 – Isaiah Moss – Another off shooting day, Moss hit just 1-of-6 shots from the floor and grabbed 2 rebounds and 1 steal in 28 minutes. The looks are there and his teammates continue to find him. Moss Just needs to find his groove again.

8 – Tristan Enaruna – Played just 3 minutes and did not record a statistic.