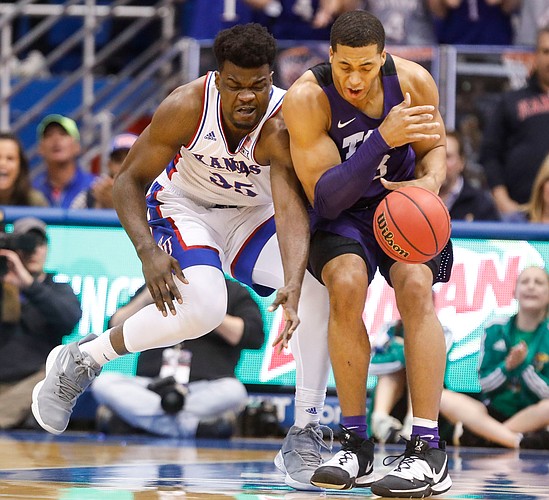 Kansas center Udoka Azubuike (35) collides with TCU forward Jaedon LeDee (23) while competing for a ball during the first half, Wednesday, March 5, 2020 at Allen Fieldhouse. by Nick Krug

1 – Udoka Azubuike – It wasn’t just the fact that Azubuike put up a career-high 31 points in his last game at Allen Fieldhouse that opened eyes on Wednesday night. It was also the way he did it. Ferocious and aggressive from the start, Azubuike terrorized TCU for the second time this season to lead the Jayhawks to clinching at least a share of the Big 12 title.

2 – Devon Dotson – Turned up all night, Dotson played hard and in attack mode from the jump. He finished with 18 points on 5-of-12 shooting, but hit 2 of 3 from the outside and all six of his free throws while also grabbing six rebounds.

3 – Marcus Garrett – Nine points, five assists and four rebounds in 33 minutes, all with just one turnover. The perfect complementary game to Dok and Dotson’s dominance.

4 – Christian Braun – Played just 20 minutes, but kept finding himself in position to deliver. And he did. Scored a couple of key baskets and looked to attack the rim whenever his jumper wasn’t there. Probably could have pulled the trigger a time or two more, but he made up for not doing it with hustle plays.

5 – Isaiah Moss – Forget the rough shooting numbers – 2-of-9 from the floor and 1-of-7 from 3-point range – Moss made up for them with five rebounds and three assists in 37 minutes. Some of those minutes were spent guarding TCU’s Desmond Bane, no easy task. Moss held his own, though, and got his first taste of a title during his college career.

6 – Ochai Agbaji – A rough night in so many ways, the sophomore guard salvage some of it with a mini-scoring flurry late in the game. Agbaji finished with 8 points on 4-of-7 shooting in 30 minutes, but also turned it over twice to go along with one assist and a handful of passes that flat-out missed the mark.

7 – David McCormack – Out of position a time or two on both ends of the floor, McCormack put up a bunch of zeroes on his stat line. But it didn’t matter. With Azubuike able to play 35 minutes in his Allen Fieldhouse finale, McCormack was only needed for 5.

8 – Tristan Enaruna – Played just 3 minutes and did not record a statistic.

Interesting that Dot is solidly in third

I thought the same thing. He missed a game and was ranked way low after the Baylor loss (when he missed half of the game) so that's part of it. But Garrett missed time, too.

That's a heck of a 3-headed-monster at the top of that list, though.