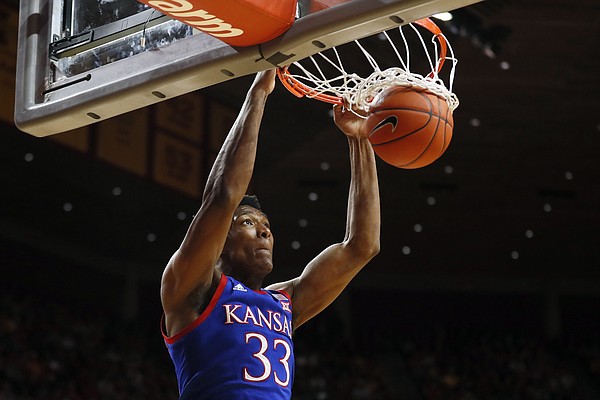 1 – David McCormack – McCormack’s muscle and tenacious effort on the glass early on set the tone for a big night for the KU big men, who combined to score 28 points an grab 16 rebounds in the easy win.

2 – Ochai Agbaji – Made 6 of the 7 shots he took, including 4 of 5 from behind the 3-point line and looked a lot more aggressive on the offensive end than he has in recent weeks. Finished with 16 points, 2 assists and 2 steals but also turned it over 4 times.

3 – Devon Dotson – The sophomore point guard proved to be nearly impossible for the Cyclones to stop, as he used a blend of power and speed to rumble his way to 20 points and 6 assists in 34 minutes.

4 – Udoka Azubuike – His double-digit rebounding streak was snapped, but, in 23 minutes, Dok scored 10 points and grabbed 7 rebounds while hitting 4 of 5 free throw attempts and dishing 2 assists.

5 – Christian Braun – Hit 3 of 4 from 3-point range, including what KU coach Bill Self called two of the game’s most important shots. Finished with 9 points, 5 rebounds and 2 assists in 25 minutes.

6 – Marcus Garrett – Played just 20 minutes because of the ankle injury but still managed to score 4 points, grab 3 rebounds and dish 3 assists to go along with 2 steals and a block. All of that was merely gravy for the Jayhawks, who played well even with Garrett out of the lineup.

7 – Silvio De Sousa – Still got sped up a little bit and lacked polish. But he played hard while he was out there and appeared to be as aggressive on both ends as he has been in weeks.

9 – Tristan Enaruna – Swiped two steals but gave one of them back with a bad turnover. Still, his 16 minutes with Garrett out of the lineup were important minutes, even if his stat line does not fully show that.

For me the highlight of this game was Dok hitting 4 of 5 free throws! I have been telling my wife for ages that when the stands at the line without the ball and uses his arms to aim at the basket, he is overthinking and then misses the shot. I didn't notice him doing that tonight. If he did, I missed it. Otherwise, he just bounced the ball, then shot it. And made the shots! I sure hope this is the beginning of the end of his FT woes and not just a one game anomaly. Go Dok!

As he gets to the line more, Dok should continue to gain confidence in shooting free throws. That said, Udoka is not Nick Collison when it comes to big men shooting free throws. As great a FT shooter as Nick was, he choked at the line in the 2003 Championship game against Syracuse. My guess is, besides the stress of playing in his final game as a Jayhawk and for a title, there might have been added pressure with all the media attention on Roy Williams' possible departure to UNC. Sadly for Nick, the pressure appeared to get to him.

Regarding this year's team, if KU makes it to the Championship game, I certainly do not want the outcome determined by whether Udoka makes free throws or not. Until then, keep putting the ball in the hoop Big Guy!