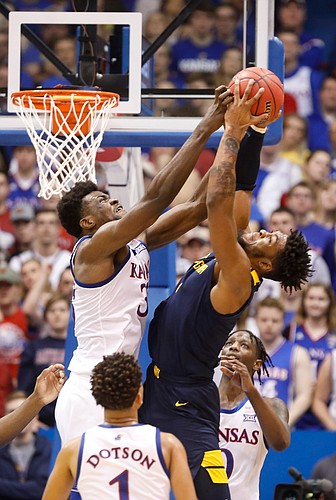 Kansas center Udoka Azubuike (35) and West Virginia forward Derek Culver (1) fight for a rebound during the second half, Saturday, Jan. 4, 2020 at Allen Fieldhouse. by Nick Krug

1 – Udoka Azubuike – Back-to-back games with double-digit rebounds for the KU center, but I’m not sure I can recall him working this hard on the glass. Fighting and scrapping for everything that came off the rim with two of the biggest monsters in the Big 12, Azubuike willed Kansas to win this war and did plenty of damage to the rim in the process, finishing several lobs that deflated the Mountaineers and gave the Jayhawks and their home crowd a big lift.

2 – Christian Braun – Started the second half and proved over and over again that he was worthy. Braun used his junkyard dog mentality to battle his way to an important night of production in his first Big 12 game.

3 – Marcus Garrett – Always such a calming influence on the game and his teammates, Garrett was at his best with the game on the line, showing what experience and confidence can do for a player in crucial moments.

4 – Devon Dotson – As KU coach Bill Self pointed out after the victory, Dotson’s ability to play all 40 minutes and handle the kind of hounding pressure that WVU throws at a point guard was nothing short of remarkable. He wasn’t perfect on either end, but considering he played the entire way, he was pretty darn close.

5 – Ochai Agbaji – Still looks a bit tentative in certain moments and needs to get more aggressive on the offensive end, both with his shot and attacking the rim. But he played roughly 37 minutes and had a couple of crucial plays along the way.

6 – David McCormack – As KU’s other starting big, McCormack had a golden opportunity to test himself against an elite front line. But it never materialized. He played little and watched KU play better with four guards on the floor. Delivered a couple of big moments — a key rebound and dunk on back-to-back possessions late — but didn’t do much beyond that.

7 – Silvio De Sousa – At one point, De Sousa found himself out there alongside McCormack in what was one of the Jayhawks’ strangest lineup combinations of the day. Foul trouble dictated it but De Sousa’s tentative play and inability to show off the explosiveness he had during his freshman season ensured that the lineup was short-lived.

8 – Isaiah Moss – Misfired bad on the couple of 3-point shots he took and did not follow up last weekend’s stellar game at Stanford with anything worth writing home about.

9 – Tristan Enaruna – Often described as “too casual,” this monster of a matchup was not the kind of game in which Enaruna could flourish and he played just over a minute.