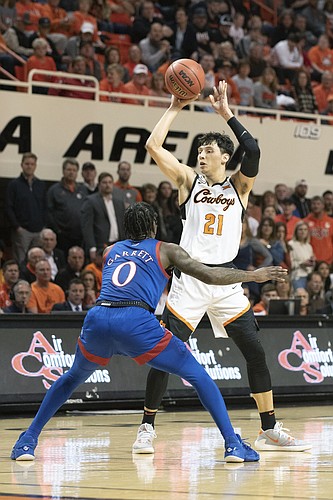 1 – Marcus Garrett – Nearly recorded a triple-double with the most Marcus Garrett-like performance of all time. Seven points. Eight rebounds. Nine assists. All in 34 minutes. Steady, subtle and so solid. His composure was clutch in helping KU survive a rough stretch to close the first half en route to the 65-50 win.

2 – Christian Braun – Making the first start of his KU career, Braun knocked in four 3-pointers and led the Jayhawks with 16 points. He also added 9 rebounds and played with the kind of fire and passion about which his teammates and coaches have bragged since he arrived on campus.

4 – Udoka Azubuike – His 5 blocks (he now has 13 in his last 3 games) saved an otherwise ho-hum night for the KU big man, who again found foul trouble and finished with 6 points and 7 rebounds. He’ll be happy to get David McCormack back from suspension because every foul will not be magnified quite as much with McCormack on the bench.

5 – Devon Dotson – Played just 26 minutes because of foul trouble and watched his teammates deliver a knock-out blow without him. Still managed to tally 11 points and 3 assists while turning it over just once.

6 – Ochai Agbaji – His pass-3-pointer, which never was supposed to go in either has him first on your list or last, depending on your perspective. It wasn’t the best night for Agbaji, who hit just 2 of 9 shots in the win. But the two makes were from 3-point range and he added four rebounds and two assists while turning it over just once.

7 – Tristan Enaruna – Again was needed because of KU’s depleted depth and he delivered a big 3-pointer and 5 rebounds in 15 minutes. Made just 1 of 6 shots.

Fewer minutes in place of whom?

He's not a great shooter, but he's not terrible. Moss is only marginally better from range (36.5 v 37.9), but not near as good defensively and rebounding.

Moss can make the first free throw on a 1&1.

He’s a streaky shooter but on the on the other hand, he’s good on defense. I agree with Jeff Gueldner who said Ochai needs to improve on creating opportunities that give him open shots.

CB was so aggressive...he reminds me of Kevin Young...always aggressive and playing his hardest...KY smiled a lot more though.

Young was a walking smile. So fun to watch. Always going all out.

Ochai can’t shoot - except for the games when he goes off and leads the team.

Dok needs David more to get breathers so he doesn’t get silly fouls than to help after the fouls.

OA - His legs are not straight, need to relax his palms when launching a J, easy fix.

Garrett the Grinder! Love that nickname!