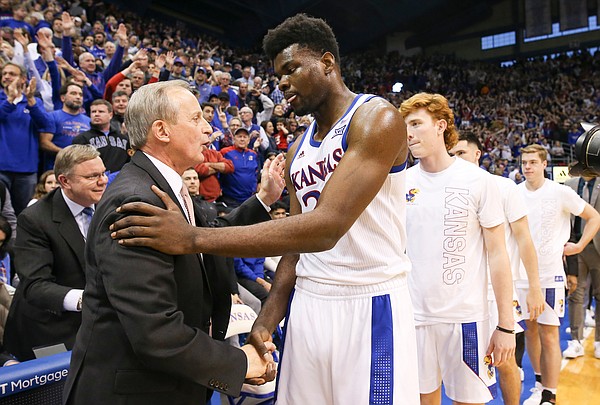 1 – Udoka Azubuike – What a different game this was with Azubuike on the floor and with Azubuike off the floor. When he was out there, Tennessee pretty much had no answer on either end. More about that in today’s game story. Finished with a double-double of 18 points and 11 rebounds and added 4 blocks, including two big ones during a monster finish.

2 – Devon Dotson – Made everything go and played monster minutes with Azubuike out of the game. In fact, he played nearly the entire game and never let the heavy workload negatively affect his decision making or quickness. Tallied 22 points and 7 assists in 39 minutes.

3 – Marcus Garrett – Like Dotson, Garrett played big minutes and continued to play with the steady presence on both ends of the floor that makes this Kansas team so dangerous. Finished with 8 points, 7 rebounds, 3 assists, 4 steals and no turnovers.

4 – Ochai Agbaji – Got things going again offensively and knocked in a couple of 3-pointers while playing 38 minutes. Finished 6-of-12 from the floor after missing his first two shots of the game.

5 – Christian Braun – Attacked, didn’t force 3-pointers and used his size and athleticism to help Kansas survive with Azubuike on the bench. Started the second half in place of Isaiah Moss and might be trending toward starting the first half of games, too.

6 – Isaiah Moss – Misfired on all but one shot attempt and looked a little lost and hesitant at times on both ends of the floor.

7 – Tristan Enaruna – Logged just 5 minutes in a game that most people thought he would play a lot more.

I hope that Dotson will return for another year and learn how to shoot. Otherwise, he won’t play in the League.

He's great for us but both shooting and creating for others are obvious things holding him back.

With that said, we don't currently have an open scholarship for him next year. I'm sure if he wanted to come back Self would find a way but the fact that we don't have one (and we filled it with 2 PG's and a combo guard) should tell you what Self thinks he'll do.

If we're hoping someone comes back, how about this: Dok could file for a medical redshirt for two different seasons that he played significantly less than half the year and get a 5th year of eligibility. It will never happen but it's nice to dream...

Dotson leads the league in scoring with 18.4 points per game. How does he do that if he can't shoot? He's tied (with Marcus Garrett) for fourth in assists with 4.4 per game. If he had shooters like Devonte and Svi that number would be much higher.

Just six turnovers for KU for this game!