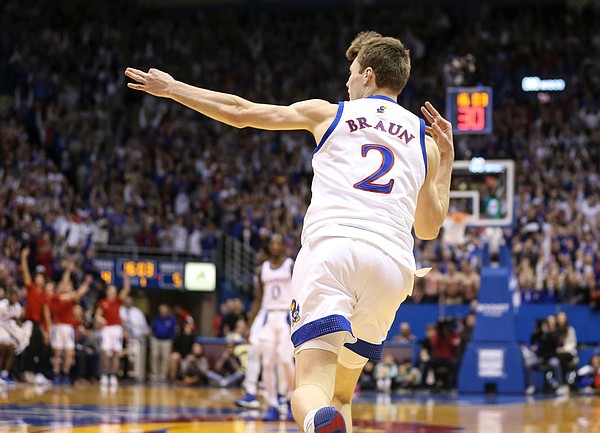 Kansas guard Christian Braun (2) celebrates after hitting a three against Kansas State during the first half, Tuesday, Jan. 21, 2020 at Allen Fieldhouse. by Nick Krug

1 – Christian Braun – His career-best six triples and 20 points were a huge part of pushing the Jayhawks out to an early lead that K-State had no answer for. Played aggressive and with a purpose on offense all night.

2 – Udoka Azubuike – K-State made it clear early on that they weren’t going to let Azubuike beat them with easy baskets. So he found another way to do it and killed the Cats on the glass, finishing with 14 on the night, 5 offensive.

3 – Marcus Garrett – So steady and another turnover-free game from the KU junior to go along with 8 points and 5 assists in 33 minutes.

4 – Devon Dotson – Far more important than any of his shots, points or free throws were Dotson’s steals. K-State could not handle his ball pressure and that made for a long night for the visitors.

5 – Ochai Agbaji – He didn’t exactly break out of his scoring slump — 6 points on 3-of-11 shooting in 31 minutes — but he played with much better energy and body language en route to making a strong impact on this game.

6 – Isaiah Moss – A step closer to what he showed at Oklahoma compared to his effort last Saturday at Texas. He still misses assignments from time to time on defense and needs to get a little more comfortable.

7 – Tristan Enaruna – Played real minutes for the first time in a while and looked aggressive and a little more confident while doing it. The more they can mix him into the rotation, the more flexibility this team will enjoy.

8 – Silvio De Sousa – Didn’t play much at all until then end, but also didn’t make too many mistakes when he was out there.

9 – David McCormack – Started again but was not out there with the first five to open the second half. The biggest issue with McCormack in the past couple of games has been his decision making and shot selection. He struggled with that again in this one.

Part of the fun of this game is seeing so many of the players succeeding where commenters has been complaining. Dok’s rebounding (and in other games shot blocking), Braun shooting, Ochai rebounding, Marcus in the non-statistical way, ...

Matt, I really look forward to seeing this blog after each game.

My only request would be to more consistently include prominent statistics for the players, such as the number of points that Dok scored (another double double), and how many steals did Dotson actually have?