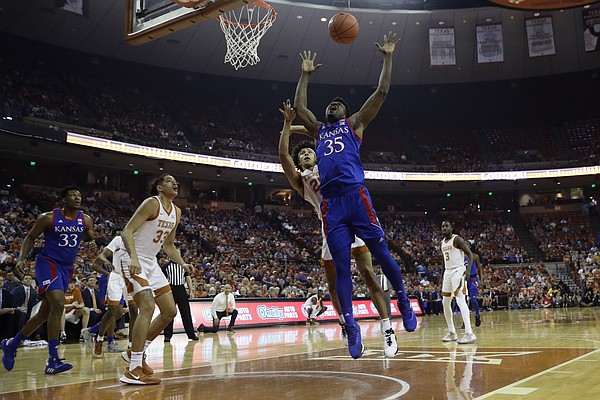 1 – Udoka Azubuike – Dominated stretches of KU's 66-57 victory on both ends, including the start of the second half which gave KU control. Continues to show his maturity and improved understanding of what it takes to play hard all the time. Just missed yet another double-digit rebounding effort, with 9, and added 17 points, including 10 in the first five minutes of the second half when KU took control.

2 – Marcus Garrett – Another day, another ailment for Garrett, who hit the deck hard in the second half and had to go to the locker room temporarily before returning to the action. KU should wrap him in bubble wrap these days because he’s too steady to keep off the floor. Finished with a monster line of 13 points, 7 rebounds and 7 assists and got it all in a fairly ho-hum manner.

3 – Devon Dotson – Hit four big free throws and a clutch 3-pointer that all but sealed the deal for the Jayhawks in his return from a one-game absence following a hip injury. Shot just 6-of-16 from the floor and 1-of-4 from 3-point range, but at least some of that can be attributed to rust. In the end, his 21 points

4 – David McCormack – There was nothing flashy about McCormack’s 20 minutes in this one. But they were solid. He finished with 6 points, 7 rebounds and did not turn it over. That’s really all the Jayhawks’ starting 4 man needs to do to be a positive presence on this team.

5 – Isaiah Moss – Scored 5 points and grabbed 5 rebounds in 33 minutes, which included a starting nod in the second half. His 3-pointer from the corner after a KU timeout that followed Texas taking an 8-point first-half lead helped keep the Jayhawks close heading into halftime.

6 – Ochai Agbaji – Agbaji, who played 31 minutes in this one, could not find his offensive game, going just 1-of-6 from the floor and 0-of-3 from 3-point range. Made a few defensive miscues and also seemed to let his offensive struggles keep him from impacting the game elsewhere with his athleticism.

7 – Silvio De Sousa – Nothing special here, but three rebounds and at least one altered shot in 2+ minutes were enough of a contribution to say he mattered and did not hurt the team.

8 – Christian Braun – Played just 3:38 and lacked aggression from the perimeter. The one time he did get aggressive, he drove right into the teeth of the Texas defense and had his shot rejected.

9 – Tristan Enaruna – Played just over a minute and did not record any statistics.

How did Doke's weight loss contribute to his progress? From what I see on the floor this year, he's jumping higher, moving faster and his stamina has improved, leading directly to having the energy to play D, block shots, and run the floor, and on top of all that, he's getting one to two fewer fouls per game for just being big. For a seven footer, his footwork has always impressed me, and he is exploiting it more by not being so wide when making moves like he did on Simms. last year, that would have been a charge or walk. He's come a long way from just being a Dunker and his FT's are improving!.

Matt-Way to try and get Doke in the conversation!!