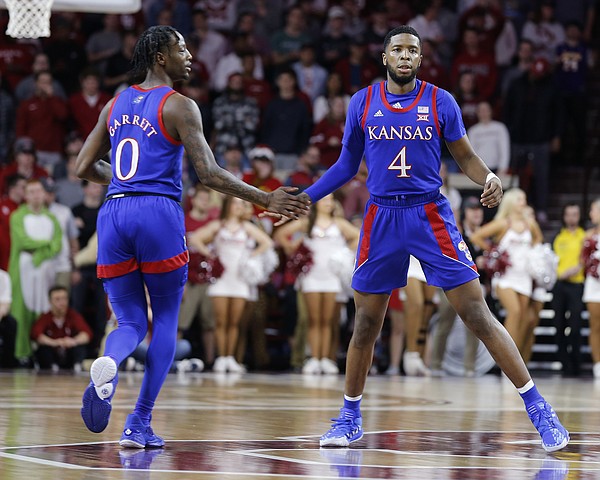 Kansas' Marcus Garrett (0) and Isaiah Moss (4) slap hands during the first half of the team's NCAA college basketball game against Oklahoma in Norman, Okla., Tuesday, Jan. 14, 2020. by Associated Press

1 – Marcus Garrett – Played 38 minutes as the team’s primary ball handler and top defender and committed just one foul and one turnover while tallying 15 points, 5 rebounds and 5 assists. Arguably his best game as a Jayhawk.

2 – Isaiah Moss – A much more aggressive approach on offense led to a 20-point outburst as the senior sharp-shooter hit 6 of 11 3-pointers on a night when Kansas needed someone to pick up the scoring slack for Devon Dotson, who was out with an injury.

3 – Udoka Azubuike – Scored 16 points and grabbed 14 rebounds and might have been most impressive as a perimeter defender. Did whatever he could and whatever he had to to help will Kansas to a key road win.

4 – Christian Braun – Brought energy and aggressive play from the first minute he checked into the game. Didn’t do much in the way of recording offensive stats, but did grab six rebounds, a block and a steal in 25 minutes.

5 – Ochai Agbaji – Finished strong and started playing with a little joy again. Watch to see if that will be the catalyst for Agbaji to get on a hot streak in the weeks ahead.

7 – Tristan Enaruna – Played 11 minutes and scored a big put-back of his own miss. Minutes have been tough to come by for the KU freshman of late, but every one he gave the Jayhawks on Tuesday was important in a game where small ball ruled the day.

8 – David McCormack – The OU matchup was a nightmare for McCormack from the beginning, as he never found much rhythm on either end. Still managed to deliver 4 points and 3 rebounds in 15 minutes.

9 – Silvio De Sousa – Played just 2 minutes but grabbed 3 rebounds and did not record any negative statistics while he was out there.