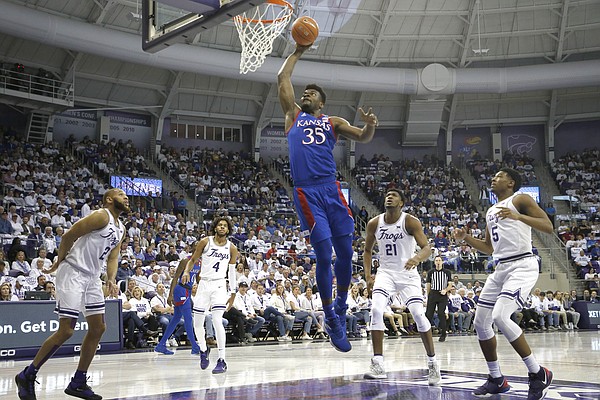 1 – Udoka Azubuike – Dominated stretches of this game, including early on after KU started very slow. Wasn’t his best game by any means, but his numbers were good and he competed throughout. 20 points, 15 rebounds, 5 blocks.

2 – Devon Dotson – The only other Jayhawk who could consistently score in this one, Dotson didn’t let his offensive burden take his mind off of his defense. Finished with 18 points and 11 assists, with 3 steals and 5 turnovers.

3 – David McCormack – He wasn’t great, but on a day when very few other players were, McCormack gave KU quality minutes in limited time. Nowhere was that more obvious than midway through the second half when he became the only Jayhawk not named Azubuike or Dotson to score a bucket to that point with a big jumper out of a timeout. Finished with 6 points and 4 rebounds in 8 minutes.

4 – Marcus Garrett – It wasn’t his typical fill-up-the-stat-sheet kind of game, but it also wasn’t a typical game. Still, Garrett played well defensively, making Desmond Bane work for everything he got, and also ran the offense at times.

5 – Ochai Agbaji – Didn’t shoot it well but did get one to fall late and also played hard defensively from start to finish. Was just 2-for-6 from the floor, but blocked a shot and picked up 2 steals as a result of his strong effort.

6 – Isaiah Moss – Knocked in a few 3-pointers, which came at key times, but made far too many mistakes and careless plays on defense to be ranked any higher. Shot 3-of-11 from the floor (3-of-8 from 3-point range) and fouled four times while turning it over twice.

7 – Tristan Enaruna – Got some legit minutes in the first half and looked good in them. Fell back into his more passive approach as the game went on, but that early stretch was a good sign, albeit a small one, for his continued development.

8 – Christian Braun – Didn’t do much on either end and caught the wrath of Bill Self on a couple of occasions. Beyond that, he started the second half on the bench instead of on the floor. Shot 0-of-2 from the floor with 2 turnovers in 20 minutes.

McCormick has a fantastic stat line. More for the team than for himself. His 8 minutes projects out to virtually the same as Dok’s who dominated. What a huge luxury to not only have one of the most dominant bigs, but also no drop off when he rests. Great, great, great to see.

At least the last 3 seem like they are becoming almost interchangeable as well in a much less dominant way. Each has different strengths, but their time is just a matter of stepping up. They are essentially filling the 5th spot (even the 4th would seem within reach), but also will determine how dangerous this team becomes.

Dotson played great bball today. I applauded his 'team first' plays. Been telling this, if Dotson plays to better the team, he and the team will achieve more. His points will come naturally, and had his teammates made all those outside shots, Dot would've got 4-6 more assists!!! The league will soon fight to get him. Trust me on this.

With his speed, craftiness with the ball, and now, his ability to find bigs, or outside shooters, will bring us deeper in March. Guaranteed. This was the missing key. Now, we just need to shoot better. We don't need to worry about D anymore. I think we have a very good chance to win it all this year. We good!!!! Rock Chalk!!!!