Azubuike's big second half delivers top spot in ratings after 69-58 win vs. Texas 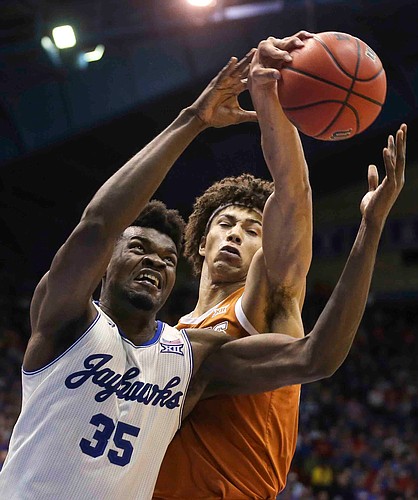 Kansas center Udoka Azubuike (35) battles for a rebound with Texas forward Jericho Sims during the second half on Monday, Feb. 3, 2020 at Allen Fieldhouse. by Nick Krug

1 – Udoka Azubuike – Fought and battled his way to another double-double on a night when he didn’t start because of a bad day in practice on Sunday. The 7-foot center completely took over the game during the decisive stretch of the second half, dunking everything he could and bringing energy to the crowd and his teammates. Finished with 17 points and 12 rebounds in 25 minutes.

2 – Marcus Garrett – Gets the edge over Dotson for the No. 2 spot because of the ankle and foot ailments he’s been dealing with. Filled up the stat sheet once again to the tune of 11 points, 5 rebounds, 4 assists and just one turnover.

3 – Devon Dotson – Another player who was terrific in the second half after a sluggish first half, Dotson finished with 16 points on 5-of-10 shooting and hit the shot of the night, a 3-pointer from in front of the KU bench with the shot clock winding down that made its way all around the rim and kissed the glass gently before falling.

4 – Ochai Agbaji – Looked more sure of himself on offense, stepping into mid-range jumpers and knocking them down at key moments. Made just 3-of-8 overall and missed both 3-point tries, but there was enough there to think that his offense might be coming.

5 – Isaiah Moss – Hit a big triple when KU needed one to extend their second-half run. But missed the four others he shot and finished with 7 points and 2 rebounds in 24 minutes.

6 – David McCormack – Started but still played the role he’s destined to have the rest of the season — Azubuike’s backup. Still, the early energy and activity was good from a guy playing just his second game after a 2-game suspension. Finished with 6 points and 3 rebounds in 15 minutes.

7 – Christian Braun – Braun was better tonight than in the 4 minutes he got the first time KU played Texas. And his 5 rebounds and tough mental approach were far more noteworthy than his 1-of-5 shooting.

8 – Tristan Enaruna – Played just 4 minutes and missed his only shot attempt. Still not all the way there, but he continues to look a little more comfortable each time out. There’s a game down the road where Enaruna will come up big.