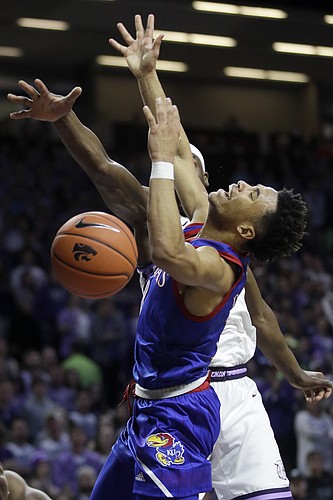 1 – Devon Dotson – The one consistent and reliable option for Kansas throughout Saturday’s 62-58 victory in Manhattan, KU’s All-American and player of the year candidate finished with a game-high 25 points and shot 8-of-11 from the floor in 38 minutes.

2 – Christian Braun – A second consecutive solid outing against KU’s in-state rival came at just the right time for the Jayhawks. He wasn’t red-hot from 3-point range like in Lawrence, but he hit a couple, got on the glass and played tough defense while playing big minutes.

3 – Isaiah Moss – Like Braun, Moss played way better than his numbers would indicate. His willingness to stick his nose in there on defense and on the glass was a big part of this win and he came up with a couple of key baskets, as well.

4 – Udoka Azubuike – Was off to another strong start before injuring his ankle. Not only did that send him out of the game for a chunk of the first half, but it also impacted his aggressiveness when he returned. Finished with 6 points and 9 rebounds while playing just 10 minutes in the second half.

5 – Marcus Garrett – Garrett had his hands full defensive all day, guarding players at four of the five positions on the floor. That left him taxed and struggling to make plays on the offensive end.

6 – David McCormack – Finished with 9 points and 4 rebounds in 20 minutes while giving KU a big body in Azubuike’s place, but he still shot just 2-of-7 from the floor and took some pretty bad shots throughout the game. Hit 5-of-6 from the free throw line, which was big in a sloppy game like this one.

7 – Ochai Agbaji – Just didn’t quite have it from the start. After two turnovers and a miss in the game’s first minute, Agbaji was pulled for a couple of minutes. He settled down after that and made a few plays. But he was not nearly as effective as he has been most of the season.

8 – Tristan Enaruna – Kansas coach Bill Self has been waiting for Enaruna to give him more and reach the point where he can play 10-15 minutes per game. Self’s still waiting.

15 and 13 is nice production from the 5 spot but David’s shot selection was a bit of a head scratcher. 15 footers are more understandable if we’re playing 2 bigs but not when there’s only one. Still really great to realize that he’s such a good FT shooter. Hopefully the rest of his game will continue to settle in so that the FTs can be even more of a weapon. He’s progressed a long way from last year but still seems too frenetic.