Dominant Dok tops ratings in 64-61 road win over No. 1 Baylor 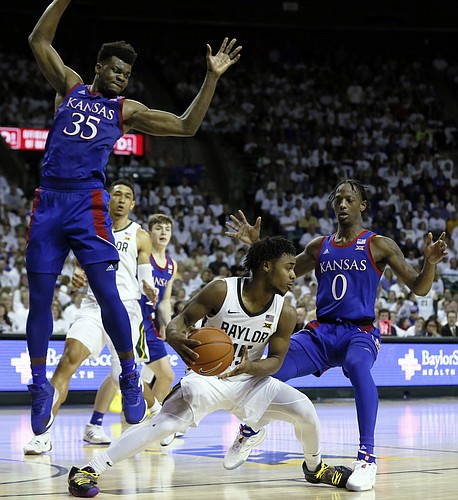 1 – Udoka Azubuike – After limiting him to 6 points on 6 shots in the first meeting, the Bears got all they could want from Azubuike, and then some, in Saturday’s rematch. The KU senior finished with 23 points on 8-of-11 shooting and a career-high 19 rebounds to go along with 3 blocks in a 64-61 Kansas victory in which he completely dominated.

2 – Marcus Garrett – So smart, calm and crafty, Garrett delivered exactly the kind of game you’d expect him to in a matchup with the No. 1 team in the nation — 9 points, 7 assists and 2 steals in 33 minutes. The 5 turnovers and 4 fouls were a bit uncharacteristic, but few players are as able to make up for their mistakes as Garrett.

3 – Devon Dotson – Didn’t have his best game shooting the ball, but he was relentless in getting to the rim and each trip was so tough. He didn’t always finish, but even his misses wound up working out, as Azubuike cleaned up a handful of them.

4 – Isaiah Moss – Played a huge role in a few different ways, none bigger than the two free throws he hit in the final seconds to put KU up 3, forcing the Bears into a 3-point attempt to tie it at the buzzer. Drove to the rim, hit a couple of 3s and even defended Jared Butler fairly well in spots. A solid all-around game.

5 – Christian Braun – The KU freshman was scrappy on D and opportunistic on offense throughout the game. Finished with 4 points and a steal on 2-of-3 shooting in 21 minutes.

6 – Ochai Agbaji – Scoreless in 39:15, Agbaji was 0-of-5 from the floor, 0-of-2 from 3-point range and turned it over three times to go along with three assists. His inbounds gaffe in the final seconds that allowed Baylor to cut the KU lead to one was almost catastrophic. But, again, this one always comes back to Self’s willingness to keep Agbaji on the floor, even on nights when he doesn’t have it. Self trusts him so much and Agbaji tries so hard — particularly on defense — that it’s tough for the KU coach to take him out.

7 – David McCormack – Fouled out in four minutes and scored four points on 2-of-2 shooting to go along with one turnovers during his short stint in the game.

x = broke his ankle 20 seconds into the second game of the season and will redshirt the season.

The light switch will come on and Ochai will become more effective.

Agbaji is more athlete than basketball player. He will provide excellent depth off the bench next season.

Ochai needs at least another year to put it together. With Dotson likely gone and Moss definitely gone, he’ll start next year and play 25-30 minutes per game.

Ochai reminds me of Marcus in that there are obvious flaws in his game that can be easily picked at from far too many recliners. Fortunately, the seat at the smart end of the bench sees so much more. That’s why he plays so much in spite of the flaws. Guessing that his game will take off, next year in particular, as he continues to develop. And the recliners will move on to hating the next player that isn’t immediately completely developed while also complaining about the ones who are and leave early.

Zebras are known by their stripes and whiners are evident as well.

Matt - Is there a stat that tracks moving screens? Dok must have excelled at that also, right?

Ochai logged 39 minutes. You don't get that kind of PT for playing poorly. That said, the turnover in the closing seconds was to say the least disappointing. Let's hope he doesn't make that kind of error in judgement again.