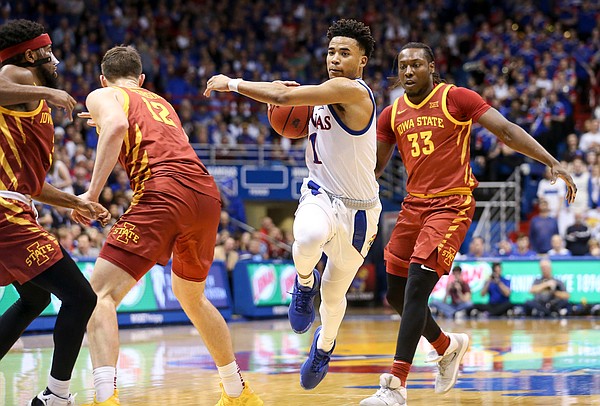 Kansas guard Devon Dotson (1) makes a move to the bucket against several Iowa State defenders during the second half on Monday, Feb. 17, 2020 at Allen Fieldhouse. by Nick Krug

1 – Devon Dotson – Looked as fast and unstoppable as he has at any point in his Kansas career while exploding for 29 points in a 91-71 KU victory. The biggest reason Dotson threatened to eclipse his career-high of 31, however, came from the 6-of-8 shooting from 3-point range. Added 3 steals and an assist during a remarkable night for KU’s lead guard.

2 – Marcus Garrett – Six assists and one turnover for the Big 12’s leader in assist-to-turnover ratio. Finished with 5 points and 8 rebounds while adding 3 steals to yet another stat-stuffer of a night.

3 – Ochai Agbaji – This was by far Agbaji’s best game in attacking the basket and he finished with 14 points in 30 minutes as a result. Hit 2-of-6 from 3-point range, which is good enough, while adding 3 assists and a steal to a productive line.

4 – Christian Braun – Broke out in a big way, scoring 13 points in the first half and adding to KU’s hot shooting from 3-point range. Didn’t do much in the second half, but KU did not need him to.

5 – Udoka Azubuike – So good and so aggressive early, Azubuike did everything he could to get to the rim. Finished with 13 points and 7 rebounds, but also turned it over 6 times.

6 – David McCormack – Had a couple of nice stretches where he looked productive and versatile on offense. Finished with 10 point in 18 minutes, but could have done even better if not for the 3-of-7 shooting.

7 – Isaiah Moss – If he was going to cool off from 3-point range, Moss picked a good night to do it. Finished 1-of-7 from the floor (0-for-4 from 3-point range), but tallied a season-high 6 rebounds to help make up for the off shooting night.

8 – Tristan Enaruna – Missed both shots he attempted from the floor and turned it over twice in just under 10 minutes.

10 – Jalen Wilson – 2x. x = broke his ankle 20 seconds into the second game of the season and is expected to be out at least three months.

Should read: Red Shirt for the year. :)

No love for Teahan?

Chris is a walkon and the ratings are for scholarship players though when a walkon scores and a 3 at that it does seem worthy of an honorable mention.

Somebody needs to tell Agbaji to stop between the leg dribble in front of a defender, especially challenging a more athletic opponent. He can't even handle the ball without a defender. If he wants to do that, do it like Dotson: make sure the ball bounce behind his rear/retreat instead of on the other side. Or like Garret: cross-over then protect the ball by crossing his leg diagonally. But bottomline is, he first needs to be bouncy, light feet, and use his wrist (with palms relaxed) when dribbling the ball. He is waaay too stiff. Please please improve your ball handling. Nobody will draft you until you can handle the ball.