Garrett steals the ball and the game, earns top spot in ratings after 58-49 win over West Virginia 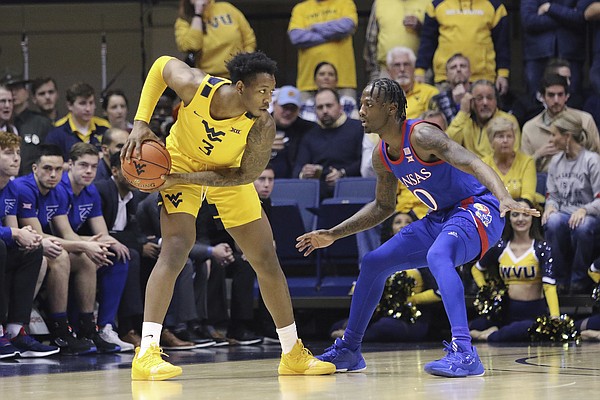 1 – Marcus Garrett – Forget about the turnovers. In a game won by defense, your best defensive player is likely your hero. And that was exactly the case for Garrett on Wednesday night. His five steals, including three in a row late with the game on the line, were nothing short of spectacular and became just the latest chapter in the book of defense that Garrett is authoring.

2 – Isaiah Moss – His 10 second-half points and two late triples were absolutely huge. And the emotion he showed after hitting them was just as big. He still only made 3-of-7 from the floor, but when those three makes come from 3-point range and you’re able to count on him defensively, everything else just kind of fades into the background.

3 – Devon Dotson – Led the team with 15 points despite an off night shooting the ball. He hit just 1-of-5 from 3-point range, but the one was a huge shot from in front of the KU bench that kick-started KU’s 19-5 run to close the game.

4 – Udoka Azubuike – Spent most of the first half on the bench in foul trouble, but was a monster factor down the stretch, picking up both of his blocks and several key rebounds in the game’s final 7 or 8 minutes.

5 – Ochai Agbaji – Despite not getting anything to fall from behind the arc, Agbaji was overall pretty solid on both ends of the floor. He could have been more aggressive on the offensive end, but what he lacked in that department he made up for by crashing the glass hard, particularly in the first half when Azubuike and David McCormack were battling foul trouble.

6 – David McCormack – Dished out a few careless fouls in the first half and did not play in the second half. Still, his four points were nice on a night when KU struggled to score.

7 – Christian Braun – Took just one shot and scored two points and grabbed two rebounds in 16 minutes. It’s not that he was bad, but a road game at WVU in mid-February is a whole different beast than anything Braun has seen to date.

8 – Tristan Enaruna – Played just 3:20 in the first half and it came with McCormack sitting with three fouls and Azubuike sitting with two. His near follow tip late in the first half would have been a highlight moment and showed the kind of effort he is capable of playing with. But he followed it up by missing both free throws.

Marcus Garrett is the grunt warrior, doing what needs to be done. Great win for the team. Very easily could have been a loss, but the team persevered and did what needed to be done for a victory.

I have to disagree. IMO, it was Moss' scoring that brought Kansas back into the game and gave the confidence the others needed. Without that kick, I don't think Garret would have had the dominating defense that he did in the last 5 minutes.

How can you forget about the turnovers? It shoul be a new metric turnover to steal ratio. If you have five turnovers and five steals, you broke even.