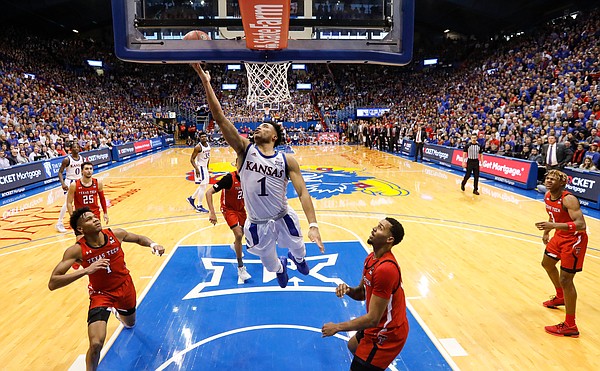 Kansas guard Devon Dotson (1) gets inside for a bucket after weaving through the Texas Tech defense during the second half, Saturday, Feb. 1, 2020 at Allen Fieldhouse. by Nick Krug

1 – Devon Dotson – Terrific from start to finish, proving to be a pest on defense and a walking bucket on offense during the Jayhawks’ 78-75 win over Texas Tech on Saturday. Dotson’s 21 points not only led the Jayhawks, but also kept Texas Tech from ever building the kind of momentum that could have sparked an upset.

2 – Marcus Garrett – Playing injured — we might as well just plug that into the equation for the rest of the season for Garrett — the KU junio finished 6-of-11 from the floor and teamted with Dotson to provide the majority of KU’s offense by turning the corner and getting to the rim. Finished with 15 points, 5 rebounds, 3 assists, 3 blocks and 2 turnovers, along with one of the filthiest steals you’ll see all season in the game’s opening minutes.

3 – David McCormack – Back from a 2-game suspension, the KU big man played a solid 20 minutes after a slow start. He grabbed 6 rebounds, scored 6 points and blocked a career-high 3 shots. He also finished with a couple of dunks that ignited the Allen Fieldhouse crowd.

4 – Ochai Agbaji – Shot it well early on and finished at 50% from the floor while also grabbing 5 rebounds and 2 blocks. Turned it over a game-high four times, though, which hurt his overall numbers.

5 – Isaiah Moss – Made a few shots that were more improvised and less out of the flow of the offense. But hit 5-of-8 overall and tallied 12 points in just over 17 minutes.

6 – Udoka Azubuike – It wasn’t Azubuike’s day. From foul trouble to his highly uncharacteristic 1-of-5 shooting performance, the big fella never got going in this one.

7 – Christian Braun – Had a couple of lapses on defense and took just two shots, hitting one. But he was aggressive at times and the one he hit was a big 3-pointer late in the game with the shot clock winding down.

8 – Tristan Enaruna – Played just 4 minutes and grabbed one rebound and got a running leaner in the paint to fall while he was out there.

Dok deserves to get credit for 3-4 FTs. Not sure it would have raised his ranking, but he still deserves credit when others were missing.