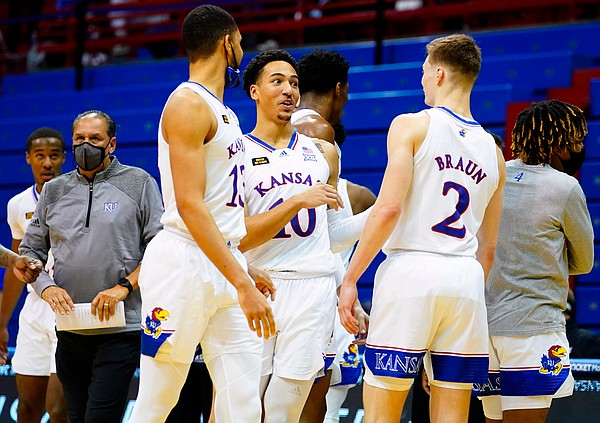 Kansas forward Jalen Wilson (10) and Kansas guard Christian Braun (2) share a moment following the Jayhawks' 73-72 win over Creighton on Tuesday, Dec. 8, 2020 at Allen Fieldhouse. The Jayhawks escaped with the win despite Braun missing the front end of a one-and-one and Wilson fouling Creighton guard Marcus Zegarowski (11) on a three-point shot with seconds remaining. by Nick Krug

1 - Jalen Wilson — I mean, this is starting to get ridiculous — for KU’s opponents. Wilson dropped another double-double of 23 points and 10 rebounds while also hitting the game-winning 3-pointer with 40 seconds to play. Even when he wasn’t padding his stat line, he was impacting the game (a 73-72 Kansas victory) with his effort, energy and confidence. Wilson’s on some kind of a run right now.

2 - Christian Braun — Maybe that banked-in 3-pointer that beat the shot clock — one of four triples for Braun on the night — was the result of him being more aggressive and looking for his shot. Whatever it was worked. Braun finished with 14 points, 6 assists, 4 rebounds and 3 steals.

3 - Marcus Garrett — Made just 3 of 10 shots and didn’t record any kind of eye-popping stats anywhere else. But he did play 35 minutes and scored 9 points, including a tough two late that put Kansas up 70-65 with 1:38 to play. On a night like this, when every single point mattered, that bucket was good enough for a spot in the Top 3.

4 - David McCormack — All in all, a real nice game for McCormack, who wasn’t perfect but certainly looked more calm and played with better poise and balance. Finished with 13 points and 7 rebounds in 28 minutes and hit Wilson for the game-winning shot. Terrific step in the right direction against a legit team.

5 - Bryce Thompson — Several of his 17 minutes came in crunch time, as the KU freshman showed the kind of grit and defensive presence to be out there with the game on the line. Thompson tallied 8 points on 3-of-6 shooting to go along with 2 rebounds, 2 assists and a steal.

6 - Mitch Lightfoot — The veteran KU forward played better minutes than his stat line suggests. It seems like we might see a lot of games like that this season. Still, what he did contribute — 2 points and 3 rebounds (2 offensive) in 6 minutes — helped KU come out on top.

7 - Ochai Agbaji — Rough night shooting the ball for KU’s most consistent performer to date and the junior guard played just 24 minutes as a result. Sometimes it’s just not your night. Tuesday wasn’t Agbaji’s night, but he still found a way to do a few positive things, grabbing 5 rebounds, dishing 4 assists and swiping 2 steals. He also turned it over 3 times, though. On to the next one for Och.

8 - Tristan Enaruna — Scored 2 points, grabbed 2 rebounds and recorded a steal in 9 minutes, trading off with Grant-Foster and Harris as the Jayhawks were in search of that one extra piece who could help lead them to the finish line.

10 - Dajuan Harris — Back-to-back quiet games for KU’s backup point guard, who played 8 minutes and scored 2 points without an assist while turning it over 1 time. Harris should be able to get back on track in the next couple of outings.