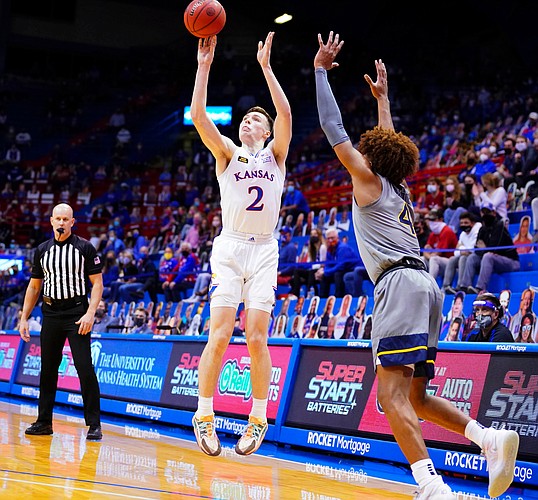 Kansas guard Christian Braun (2) puts up a three against West Virginia guard Miles McBride (4) during the first half, Tuesday, Dec. 22, 2020 at Allen Fieldhouse. by Nick Krug

1 - Christian Braun — Led the Jayhawks with 22 points, but, more importantly, led them out of the gate with two early 3-pointers that opened the floodgates for an explosive 3-point shooting night from his team. Hit 6-of-12 from 3-point range and STILL dished seven assists. This one was in the running for his best game as a Jayhawk to date.

2 - David McCormack — Recorded a double-double (10 points, 11 rebounds) and helped KU survive the muscle from West Virginia big men Derek Culver and Oscar Tshiebwe. Played with more poise and patience most of the night and also focused on a lot of little things like better ball screens and racing down loose balls. McCormack’s night was key. But the real good news for McCormack and Kansas is he can still play a lot better.

3 - Jalen Wilson — Wilson got into one of his zones during the second half, when he hit 3 3-pointers to spark KU’s knockout run. But even when he wasn’t red hot, he got on the glass and did plenty of Jalen Wilson things to help his team pick up a big time win over a top-10 team.

4 - Ochai Agbaji — Eleven points? Not bad. Three turnovers? Not good. Ten rebounds, including six on the offensive glass, against one of the best rebounding teams in the country? Terrific. And just what the doctor ordered for the Jayhawks.

5 - Marcus Garrett — A wildly efficient 15-point night on 6-of-8 shooting was somewhat overshadowed by the solid play of his teammates. Still, Garrett played a team-high 36 minutes and was out there making sure everything went right for Kansas and didn’t for West Virginia.

6 - Bryce Thompson — Managed 4 points in 10 minutes off the bench and continues to show that he can get to the free throw line and knock them down when he does. The break will be good for him, and it’s safe to say Thompson’s got some good games in him that will probably surface in late January or February.

7 - Dajuan Harris — Played just 9 minutes and didn’t do much on the stat sheet, but he also didn’t need to. This was not a night when Harris was expected to do much, so his stats were no surprise.

8 - Mitch Lightfoot — Grabbed a couple of boards and did his part to battle with the WVU bigs during his 8 minutes on the floor. Finished with 2 rebounds and 2 fouls.

9 - Tristan Enaruna — Played just a 1:39 and fouled twice and turned it over once. Did record a block, though, and he looked to be engaged during the short time he was on the floor.

David is definitely getting better. He's not Azibuke, and won't ever be, but he's trying to be, and as he improves, he's going to force more defense into the paint, and in a year where we've got some assassins from long range, that's going to pay off a lot, even if he doesn't score much.

I can't say enough about Christian, it looks like he always plays beyond his abilities, and just plays with an "I don't care attitude." By that I mean, it seems like he doesn't care who he's going up against, or whether the odds are against, him, it's like he just knows he can do whatever he wants, playing with massive confidence.