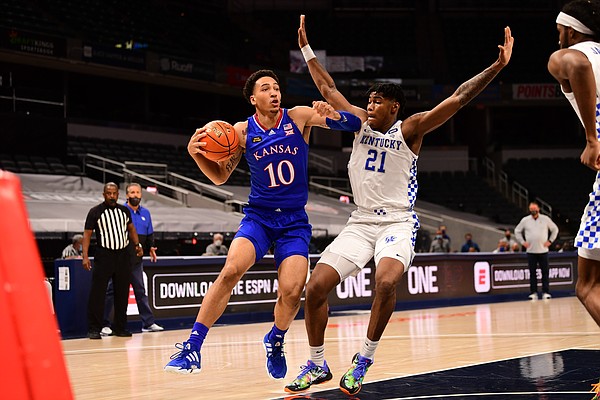 1 - Jalen Wilson — Took over stretches of the second half and led Kansas with a career-high 23 points and his first career double-double. The experiment with him playing the 5 in KU’s small-ball lineups is working out tremendously for both Wilson and the team thus far.

2 - Dajuan Harris — For the second consecutive game, Harris’ presence on the floor calmed the waters for Kansas and sparked a KU surge. The 6-foot, 160-pound point guard is rarely going to wow you with his physical prowess, but his feel and impact are off the charts. Scored 2 points, dished 5 assists and swiped 4 steals in 22 minutes, while recording a +12 plus/minus number in a game decided by three points.

3 - Ochai Agbaji — For the third game in a row, Agbaji’s aggressive mindset early on benefited Kansas, which was woeful on offense for much of the first half. Had he not connected on a few shots early, KU might not have been close enough for his five-point mini-run in the final three minutes to matter as much. Another solid game for the KU junior, even if it was a bit of an off night shooting.

4 - Marcus Garrett — Tough call for the 4 and 5 spot here, but I went with Garrett for two reasons: First, he fought through illness on a night when it would’ve been very easy for him to say he couldn’t go. Second, his eight first-half points on 4-of-7 shooting were massive for a Kansas team that shot horribly the entire first half and could not even get the ball up to the rim when the Jayhawks got into the paint. Garrett did and delivered eight big points and 35 tough minutes.

5 - Christian Braun — Last game’s 30-point scorer shot 2-of-10 from the floor, 0-of-4 from behind the arc and even missed four of the eight free throws he attempted. But he made up for those numbers by grabbing 13 rebounds, including six on the offensive glass and swiping two steals and two blocks in a game-high 38 minutes.

6 - David McCormack — The struggling big man grabbed a few key rebounds and was clutch at the free throw line, where he scored five of his seven points. Look at that and you’ll see a solid outing. Look at the 1-of-9 shooting and two turnovers in 22 minutes and you’ll see otherwise.

7 - Bryce Thompson — Missed the only two shots he took and fouled three times, but was serviceable enough to be out there for nine minutes. Thompson likely learned a lot even while not playing well in this one. And I’m guessing he’s dying for another crack at a big name program like that.

8 - Tyon Grant-Foster — Missed the only shot he attempted — a 3-pointer — in his two minutes on the floor, but slipped ahead of the final two on tonight’s list by grabbing one offensive rebound.

9 - Mitch Lightfoot — Played just two minutes and did not record any statistics.

10 - Tristan Enaruna — Played just two minutes and did not record any statistics.

As much as we need McCormack to find a little Dok for his game, it would also be great if Tristan could learn/replicate Jalen’s performance.

In my opinion, Tristan is NOT playing up to his athletic potentials.

The ESPN Broadcast said that McCormack was suffering from ankle issues the entire and previous game. So, it appears that D-Mac is hurting. The lack of athletic Big Guys not performing is a concern going forward. Thank God that Jayhawks have Jalen on the roster.

Mitch Lightfoot has been a dissappoitment (to me). He's not a Power 5 Level talent.