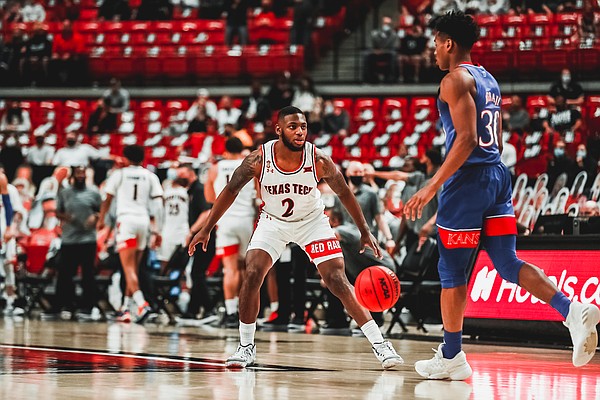 1 - Ochai Agbaji — Arguably the best game of his life ended with him hitting the game winning bucket with 13 seconds to play. Prior to that, he poured in 21 more points on 8-of-11 shooting and looked to be playing a different game than almost everyone else in the gym. The junior’s rock solid start rolls on.

2 - Marcus Garrett — Garrett missed a few outside jumpers and had a couple of tough shots inside knocked away. But anyone harping on those moments does not get what Garrett’s all about. The senior point guard scored 10 points, grabbed 10 rebounds and dished 4 assists (including the pass for the game winner) while committing just one turnover in 34 minutes against the nation’s No. 1-ranked defensive team. That’ll play.

3 - David McCormack — He wasn’t great by any means. And he still has all kinds of issues as a scorer and defender at the rim. But his ability to be on the floor and contribute to KU’s offensive flow was huge. So was his five-point surge to open the second half. Don’t think he deserves to be ranked this high? Look no further than the fact that KU coach Bill Self elected to keep McCormack on the floor with 6 minutes to play after he picked up foul No. 4 as proof of his importance in the victory.

4 - Christian Braun — It was a toss-up at the 4 and 5 spots and neither player got it for his offensive production. But Braun’s late crash of the glass that kept the ball with Kansas and set up Agbaji’s game winner ever-so-slightly won out over Jalen Wilson’s stop at the buzzer. After all, without Braun’s rebound, Wilson would not have been in the position of being the defensive hero.

5 - Jalen Wilson — His stop on the game’s final possession called to mind some more of that junkyard dog mindset he loves to play with. And his hard drive and finish that put Kansas up 2 with 2:42 to play was reminiscent of a similar play late in the win over Kentucky. Wilson’s a gamer. Plain and simple.

6 - Dajuan Harris — The backup point guard was KU’s best player off the bench by far on Thursday night. Scored 3 points, dished 3 assists and grabbed 3 rebounds. Most importantly, though, he played 23 minutes and allowed Garrett to grab six critical minutes of rest.

7 - Bryce Thompson — Despite what his stats show (a bunch of zeroes), Thompson must’ve done something right. He was the lone Jayhawk with a double-digit plus/minus number (+10) while playing 14 minutes and scoring 2 points on two trips to the free throw line. Not the kind of effort he’ll tell his kids about. But it was one that helped Kansas pick up a tough victory.

8 - Mitch Lightfoot — Lightfoot got a chance to impact the game real early on. And, as is typical, he battled his tail off the entire time he was in there. Just wasn’t a favorable matchup. After all, a big chunk of this one was played with 10 guards on the floor.

9 - Tyon Grant-Foster — Scored two points and played 4 minutes, but seemed to have a bigger impact than either of those numbers suggest. Still not quite up to the expectations and visions Self and many fans have for him. But there are plenty who still believe those days are coming.

10 - Tristan Enaruna — His best moment was a no-doubt, easy-decision pass to Tyon Grant-Foster for a free two points after breaking Texas Tech’s pressure. His worst was not knowing there were 2 seconds remaining on the shot clock after catching an inbounds pass and failing to get a shot off. Enaruna continues to have ups and downs, and it’s hard for him to find much rhythm in just 4 minutes. It’s also hard for Kansas to play him much more than that right now.