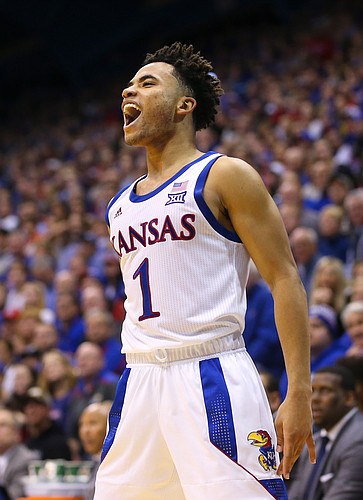 Kansas guard Devon Dotson (1) reacts to a shot during the second half, Friday, Nov. 8, 2019 at Allen Fieldhouse. by Nick Krug

1 – Devon Dotson – Clearly driven by a sub-par performance against Duke, Dotson was lights out in this one, putting up numbers that threatened triple-double status and setting the tone early with his tenacity.

3 – Udoka Azubuike – The big fella dropped a double-double of 10 points and 10 rebounds in 28 minutes and appeared to have much more room to work — and success — when KU went to its smaller lineups.

4 – Ochai Agbaji – It took him a minute to find his stroke from the outside, but he knocked in 3-of-8 from 3-point range and finished with 13 points, four rebounds, two assists and two steals in 35 minute. He still had three turnovers, but at least one wasn’t his fault.

5 – Isaiah Moss – The senior grad transfer made his KU debut count, dropping in eight points and three rebounds in 25 minutes. Much better in the second half than in the first, Moss already appears to have the look of a player who is never going to be afraid to let it fly when he has space.

6 – Marcus Garrett – Not his best night in any one area, but KU didn’t need it to be. Still finished 4-of-8 from the floor, 2-of-4 from 3-point range and dished five assists with two turnovers. His poise and presence early on was his biggest contribution in this one.

7 – David McCormack – Made his second consecutive start but played just 10 minutes. The matchup just wasn’t conducive to playing KU’s big bodies. He did hit a deep jumper early in the game when KU needed someone to score, but only tallied those two points and four rebounds on the night.

8 – Silvio De Sousa – Self said after the game that De Sousa was much better in this one than he was against Duke. The numbers don’t really show that, but he did move with more purpose and freedom and did not appear to be quite as bogged down by the mental side of the game. Still has some work to do to get all the way out of the hole, but he’s at least trending in the right direction ever so slightly.

9 – Christian Braun – Played just two minutes and missed his only shot and a pair of free throws. The free throws were the result of a strong take to the rim on the baseline, but he was not out there enough to make a real impact.

10 – Jalen Wilson – Played just 27 seconds before breaking his left ankle, an injury that will cost him at least the next three months.

It's encouraging to see Dotson's score and improved ATO, but he's still not doing enough involving bigs. He doesn't have good judgement when to toss a lob and when to pass leading bounce-pass. I'd love to see kusports analysis on what Dotson could improve. I seriously think this kid has to improve A LOT in court vision, in willingness to create easy buckets for others. I've been saying this since last year. He needs to be more like 'Tae. He can be just as good.

DeSousa, he looks really sloooow, non explosive, sticky feet. Coaching staff needs to mold this kid to be more bouncy than he is now. How do you expect this kid finish the rim if his hands are in shooting position? Dont' they train him how to elevate under the basket, how to power dribble and finish with authority? I haven't seen that in him. He looks so bad out there. VERY BAD.

Garrett, he's shown so much improvement so far. I love his move inside on Moss' bounce-pass. His passes have been on-target, 3pt looks awesome, he just needs to go up and dunk the ball more when he dribble drives!!

Enaruna, gotta love this kid! Unselfish, very fun to watch. He will find a way to finish from the wing. He will finish this season strong.