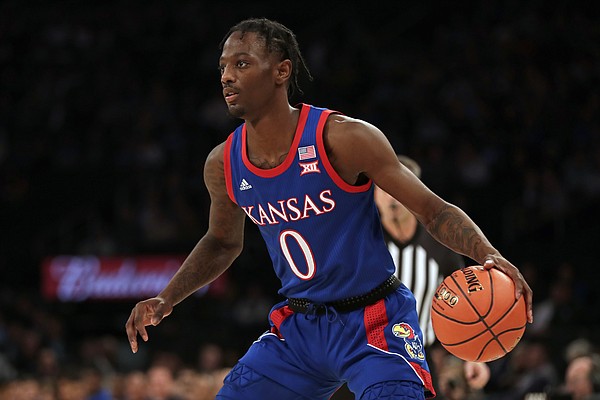 Kansas guard Marcus Garrett (0) in action against the Duke during the first half of an NCAA college basketball game Tuesday, Nov. 5, 2019, in New York. (AP Photo/Adam Hunger) by Associated Press

1 – Marcus Garrett – Easily KU’s best player in this one, Garrett was efficient on offense — five assists and two turnovers — and his usual lockdown self on defense. His 5-of-13 shooting night wasn’t the prettiest, but even that was the product of a player who was forcing the action and trying to attack the Duke defense.

2 – David McCormack – Another ugly shooting line (2-of-7) did not erase an otherwise solid night. Starting in the 4 spot for the second game in a row, McCormack added 13 rebounds and six points to go along with two steals and a blocked shot. He misfired on a few jumpers, turned it over three times himself and still looked a little overmatched defending the perimeter. But all in all it was a decent first step in his sophomore season.

3 – Udoka Azubuike – He has to get more than four shots, but some of that is on his teammates. Azubuike was active all night and grabbed eight points and eight rebounds. His four turnovers were a problem, but he dished four assists and even hit two of the three free throws he attempted.

4 – Ochai Agbaji – He started out great and was a key part of the Jayhawks’ 14-0 second-half run that put them up by nine. But, strangely, Agbaji was at his worst in transition, where he suffered many of his five turnovers and missed a few opportunities to get Kansas easy points.

5 – Devon Dotson – One assist and six turnovers isn’t what you want to see from your point guard. Still, Dotson’s ability to drive to the rim at will helped keep KU in this one. In 38 minutes, he hit five of nine shots but missed his first three 3-pointers. The only one that went in was the bank shot at the buzzer that did not matter.

6 – Tristan Enaruna – The lone freshman who played double digit minutes had a solid debut for the Jayhawks. Enaruna tallied five points and grabbed two rebounds on 2-of-3 shooting, but impacted the game much more than those numbers suggest. The Jayhawks have something here and it would not be a surprise to see his minutes increase from 16 to much higher sooner rather than later.

7 – Silvio De Sousa – De Sousa’s junior debut was one to forget. He struggled at the 4, did only marginally better when playing the 5 and played just eight minutes, grabbing four rebounds and scoring three points, all on free throws.

8 – Christian Braun – Missed his only shot and fouled twice. Tough night — and place — to break into college basketball. He’ll get better from here.

9 – Jalen Wilson – Logged just two minutes and had a foul, a turnover and a quick-trigger missed jumper.

Great points, Matt. If I may add a couple of observation:

Duke defended the post entry pass very well. I liked watching what Garrett and Dotson were able to do driving through traffic and getting deep paint touches. Often they may miss a difficult shot but create easy putbacks on the weak side for the bigs.

I was surprised to see more Braun than Moss and Wilson.

I definitely wanted the ball to touch Garrett's hands in every possession on the last two minutes. Dotson will play better as the year progresses and he may end up being the go to guy late in games, but last night was not his night, and I don't yet see a killer instinct in him. It may come out when his confidence is higher.

On the same note, Ochai also needs to develop a mean streak. He's going to be a star, and he has the potential to be the kind of guy who can take over a game whenever he wants, but if KU's going to be a contender this year, then he and Dotson both will need to be more assertive and take some of the pressure off of Garrett.

McCormack will be very good this year and we know exactly what to expect from Udoka as long as he stays healthy. I predicted that De Sousa may be set up to underachieve this year because the expectations were built too high for him after the final four season and the last year he had to sit out. He may struggle this season, but I think that it will be good for him to eat up on some cupcakes before we start the conference slate.

I hope that Moss is able to contribute this season, because we need more shooting.

Why are you surprised Braun played more than an injured Moss who was not on the active roster?