A tie at the top — and with good reason 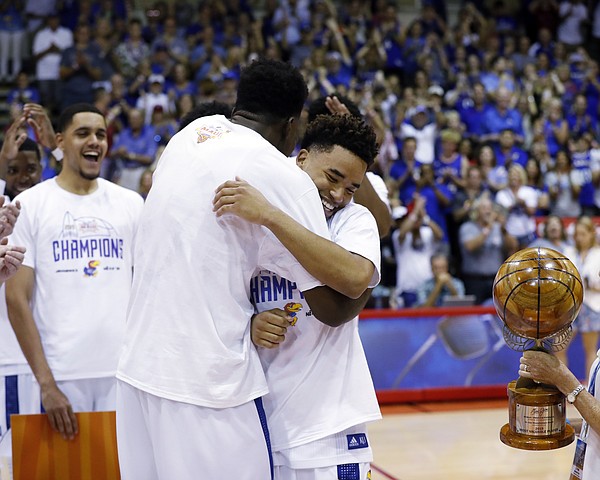 T1 – Udoka Azubuike & Devon Dotson – I can’t recall if it has happened before, but we have a tie for the top spot in the ratings. I just could not see putting Dotson or Azubuike ahead of the other after the two played the games of their lives in leading Kansas to a Maui Invitational title game win over Dayton on Wednesday. They combined for 60 points on 23-31 shooting and played a combined 76 minutes, including all 45 by Dotson. No one’s expecting to see anything like that again any time soon, but if the Jayhawks can find a way to even come close to replicating it, the one-two punch of KU’s biggest player and smallest player could be flat-out nasty and put fear into future KU opponents. If that isn’t the case already, that is.

3 – Ochai Agbaji – Agbaji, like Dotson, played all 45 minutes in this one, doing things a little out of his comfort zone for the good of the team. His defense on Dayton big man Obi Toppin was strong and he had a late drive to the rim for two big points as Kansas and Dayton were fighting for everything they could get down the stretch. By no means was this Agbaji’s best offensive night. He only finished with six points. But he had four assists, six big rebounds and recorded a block and a steal, as well. His on-court poise and leadership also may have been overlooked. But it shouldn’t have been.

4 – Marcus Garrett – His line was terrific. And his ability to get to the rim off the dribble against pretty much anybody in the country is a real weapon for the Jayhawks. But Garrett’s foul trouble — only some of which was entirely his fault — kept him from being ranked any higher. Had he avoided foul trouble, he, too, probably would’ve played 40+ minutes in this one. As it was, he made the most of the 29:14 he did play.

5 – Isaiah Moss – If that final shot in regulation would have gone in, Moss probably would’ve wound up third. As it was, he fell to fifth, but cracked the top five because of Self’s ability to trust him with 36 minutes. Missed the only shot he took and got crossed up a couple of times on defense. But he took a few turns guarding Toppin, competed for every loose ball and looked like the veteran he is.

6 – David McCormack – McCormack looks to me like a guy who is getting a better understanding of his role each time out. His numbers don’t show much, but he seems to be comfortable playing where he needs to play and doing what he needs to do. He played just 15 minutes in this one, but came up with a monster slam off of the offensive glass for his only bucket.

7 – Tristan Enaruna – Hit a big 3-pointer as his most memorable contribution in 18 minutes. But also grabbed four rebounds and a block.

8 – Christian Braun – Played five mistake-free minutes and, like McCormack, appears to be getting a better understanding of his role each time out.

9 – Silvio De Sousa – Played just one minute and had a foul and a turnover to show for it. He’ll figure it out, but De Sousa’s current lack of confidence is impacting both the way he plays and how much Self feels he can play.