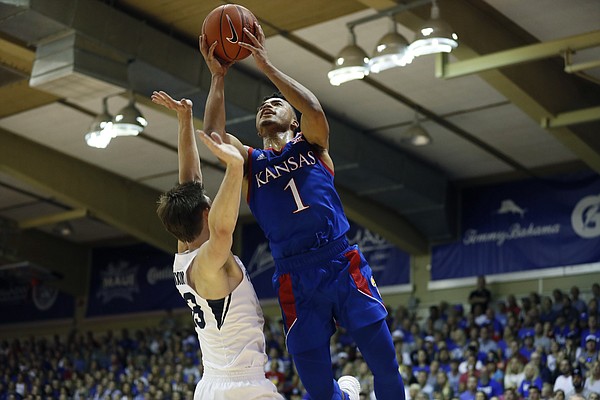 1 – Devon Dotson – Too quick and tenacious for the Cougars to handle. Dotson didn’t always make the right decisions, but when he did, BYU had no answer. Thirteen points and eight assists in the win.

2 – Ochai Agbaji – Agbaji did so many things well in this one, but not all of them showed up in the box score. From keeping balls alive with extra effort and pushing the pace offensively, to locking in on his man and helping the Kansas defense lock the Cougars down, the sophomore had his second straight strong game in Maui, 14 points, five rebounds and three assists.

3 – Udoka Azubuike – Maybe they’ll start calling him Mr. Second Half. For the second game in a row, Azubuike came up huge in the second half, punishing the rims and the Cougars en route to 11 points and 10 rebounds in 26 minutes.

4 – Marcus Garrett – Kansas didn’t need his offense, but he still knocked in a key 3 and got to the rim a couple of times. But it was his defense — go figure! — that proved most valuable in this one, both in guarding BYU’s Jake Toolson and getting his hands on balls to keep the Cougars from getting comfortable.

5 – David McCormack – Started and gave strong effort most of the night. Still missed a couple of assignments and didn’t play to his size all the time. But what he lacked in those areas he made up for in effort, finishing with 16 points and five rebounds on 7-of-9 shooting.

6 – Isaiah Moss – Not his best night shooting — he never got his feet under him consistently — but he got to the rim well and played decent D as the first man off the bench.

7 – Tristan Enaruna – He’s still learning. Had a chance to kill the BYU zone (which they played as a desperation defense) but just isn’t aggressive enough yet to do real damage. Finished with three points — all at the free throw line — in 16 minutes.

8 – Christian Braun – A couple of mistakes early cost him some playing time. But that alley-oop finish in the second half is all anyone will remember about his game tonight.