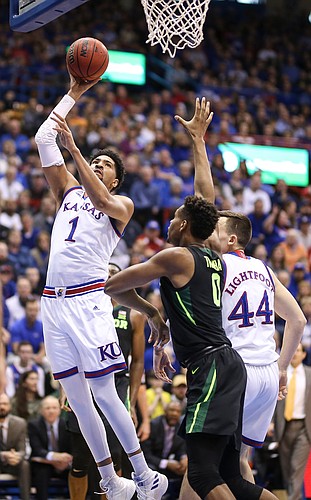 Kansas forward Dedric Lawson (1) puts in a bucket over Baylor forward Flo Thamba (0) during the first half, Saturday, March 9, 2019 at Allen Fieldhouse. by Nick Krug

1 – Dedric Lawson – Filled up the stat sheet for his 20th double-double of the season and carried the Kansas offense for big chunks of this one. Finished with 23 points and 14 rebounds in 36 minutes while going 11 of 12 from the free throw line.

2 – David McCormack – Delivered a monster first half and played an important role in KU building a lead at the break. Finished with 12 points and 5 rebounds on 6-of-9 shooting in 18 minutes.

4 – Devon Dotson – As he has been all season long, Dotson was absolutely fearless in this game, attacking the rim and finishing with 15 points. The total would’ve been higher had he hit his free throws and his turnover total (3) was higher than his assist total (0). But in so many important ways, he has been the heartbeat of this team all season long.

5 – Ochai Agbaji – Only scored 6 points, but got on the glass with aggression for 8 rebounds and also dished 4 assists in 30 minutes.

7 – Mitch Lightfoot – Drew one charge, should’ve been given another and scored 4 points and grabbed 4 boards while playing tough in the paint.

9 – Charlie Moore – Missed 2 shots, including one that just clanged off the rim from half-court to beat the halftime buzzer, and recorded 3 fouls.

KU Sports Extra - One More Win at AFH by KUsports.com

Coach Self after KU’s win over Baylor by KUsports.com

Baylor post game after losing to Kansas #kubball by KUsports.com

In retrospect Self should have immediately committed to starting McCormack and sticking with him when Azubuike went down. This team would be much better at this point. All McCormack really needed was game seasoning. But hindsight is 20-20.

You can't teach energy level-up. Really. David, always plays with Goliath-energy. Amazing. Now, he is ready to be a rim destroyer. Dotson has a lot of work to do - he has to find David - wide open waiting to stuff the rim anxiously. Somebody will please please throw those lobs to David. This guy is so hungry, he will score 20s next time we know. He is getting it now. Better watch out...