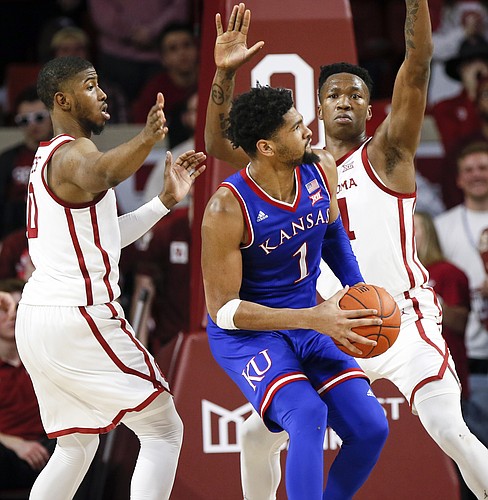 1 – Dedric Lawson – Another double-double, his 19th of the season, was notable on the box score, but still did little to impact KU’s chances in this one. Lawson hit 6 of 11 shots from the floor, including 3 3-pointers and was a stat producer on a night where very little went right for Kansas.

2 – David McCormack – Easily the KU player who played with the most consistent effort and energy in this one, McCormack finished with a career-high 18 points, an impressive feat, even if some of it came in garbage time.

3 – Marcus Garrett – 8 points and 5 rebounds to go along with 3 turnovers in 26 minutes won’t land you in the third spot in these ratings very often. But it did tonight for Garrett, who had one stretch where he hit a couple of jumpers and proved to be the kind of assertive offensive player KU needed.

4 – Devon Dotson – Speaking of assertive, Dotson was in attack mode for much of the night, as per usual. Unfortunately for the freshman point guard and the Jayhawks, though, very few of his shots fell through (2-of-7) and Dotson also turned it over 3 times to go along with his 4 assists in 26 minutes.

5 – Ochai Agbaji – I give Agbaji a lot of credit for having the confidence and conviction to keep taking open jumpers. He just missed 8 of the 12 he attempted. Self said after the game that Oklahoma’s defensive game plan was smart and contributed to KU’s struggles to score. They basically turned the Jayhawks into a jump shooting team and told Kansas it was going to have to make jumpers to hang. The Jayhawks couldn’t. And so they didn’t.

6 – Mitch Lightfoot – Four fouls and four rebounds along with 2 turnovers in 17 minutes did little to bring the kind of edge and energy KU has counted on from Lightfoot of late.

7 – K.J. Lawson – Hit the glass hard all night for 5 rebounds and dished an assist in 13 scoreless minutes.

8 – Quentin Grimes – After back-to-back strong outings, the KU freshman came crashing back to the form that has plagued him all season — that of a second-guessing, inconsistent, unsure offensive player. Finished 1-of-6 from the floor for 3 points and 3 turnovers in 26 minutes.

9 – Charlie Moore – Made 1 of 3 shots for 3 points and 2 assists but played just 9 minutes and fared no better than any of his teammates.

The best thing about these freshmen is that, next season, they will be sophomores.

Just feels like this years team lacks a vocal leader. Someone who makes the players accountable.