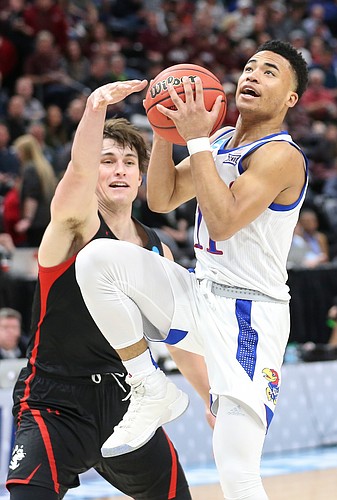 Kansas guard Devon Dotson (11) gets up to the bucket against Northeastern guard Donnell Gresham Jr. (22) during the first half, Thursday, March 21, 2019 at Vivint Smart Homes Arena in Salt Lake City, Utah. by Nick Krug

1 – Devon Dotson – Easily the best player on the court in this one, Northeastern never found an answer for Dotson’s quickness and ability to attack the rim. Finished with 18 points, 4 rebounds and 2 assists in KU's 87-53 victory, but was so aggressive and so good to the rim that the numbers don't do it justice.

2 – Dedric Lawson – Scored early and often and did a great job of getting good position down low and giving the KU guards a good target to throw into the post and over the top of the Northeastern D. Finished with 25 points and 11 rebounds in just 27 minutes and got his first NCAA Tournament off to a great start by topping both of his averages with ease.

3 – K.J. Lawson – Big time effort off the bench for the Jayhawks, putting in 13 points on 6-of-10 shooting in 23 minutes. His length, ability to play inside and out and confident demeanor was just what KU needed in its Round 1 win.

4 – Marcus Garrett – His quick impact on back-to-back possessions in the first half was key, getting a bucket and then a steal and an even-easier bucket in back to back trips. That set the tone and served as proof that KU’s athleticism would be too much for the Huskies.

5 – Quentin Grimes – Didn’t shoot it well but played with poise and intelligence throughout the game. Helped make his teammates better and that was important in this one.

6 – Mitch Lightfoot – Mitch did what Mitch does – played big, tried to block shots and was a good teammate and ball mover on offense. Not great numbers, but not a bad night. Started the second half after a solid first half.

7 – Ochai Agbaji – Looked timid and unable to just let it go. That was on offense, defense and as a passer. Hit the glass for a couple big rebounds and buckets, but can still play so much better.

8 – Charlie Moore – A pretty classic Charlie Moore type of game. Had some good moments leading the break and handling the ball when Dotson sat, but also tried to do too much and tried to play above his ability. If he just did what he was capable of night in and night out, he’d help KU way more than he does.

9 – David McCormack – Hit the glass for a couple of offensive rebounds — one early that was big — but didn’t play enough during real game time to make much of an impact.

Note: Injured center Udoka Azubuike had recorded 50 points through KU’s first 13 games of the season and freshman Ochai Agbaji did not start playing until Game 15. Senior Lagerald Vick left the team to take a leave of absence two days before Game 24 and is finished for the season.

Charlie is capable of way more than he's producing. At this point, he's the only player that hasn't broken out yet this year. I'm still hoping it will happen, though it is almost nicer to see him do all the support, fill-in things well.

Love the picture of the Husky going up to block Dotson at the rim on one side of the basket, but looking over his shoulder because Devon has blown past him and is laying it in on a reverse layup. Like something out of a comedy movie.