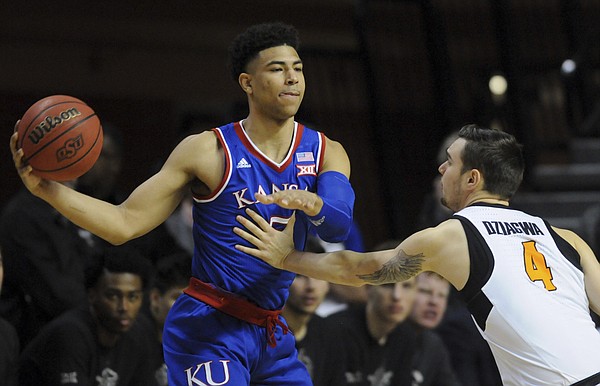 Kansas guard Quentin Grimes, left, holds the ball while under pressure from Oklahoma State guard Thomas Dziagwa during the first half of an NCAA college basketball game in Stillwater, Okla., Saturday, March 3, 2019. Grimes scored 17 points in the 72-67 win over Oklahoma State. by Brody Schmidt/AP Photo

1 – Quentin Grimes – Played one of his best games as a Jayhawk and it finally wasn’t just because he made shots. Grimes was in attack mode all afternoon — on both ends of the floor — and flashed some of those play-making abilities that made him such a highly sought after 5-star prospect.

2 – Dedric Lawson – Masterful against the double and triple teams he saw all day, Lawson battled in the post for 30-plus minutes and came away with 20 points and 15 rebounds to show for it on a day when KU needed every one.

3 – Ochai Agbaji – Didn’t look great out of the gate and made some uncharacteristic mistakes, but still knocked in a couple of big 3-pointers and brought the kind of heart and athleticism that can compete with anybody.

4 – Mitch Lightfoot – Although it wasn’t quite as impactful as on Monday night in a home win over K-State, Lightfoot made it clear, once again, that this team plays better and things flow easier when he’s out there. Tallied 7 points, 1 rebound and 3 assists in 17 minutes.

5 – David McCormack – A great start by a man possessed gave way to experience and a little more poise. Still, in the game’s first 9 or so minutes, McCormack scored 5 points and made his physical presence felt near the rim.

6 – Marcus Garrett – None of it was spectacular, but Garrett managed 6 points, 6 rebounds and one crucial steal in helping KU survive.

7 – Devon Dotson – Not anywhere close to the KU point guard’s best day, but, even with that, he still played 32 minutes, had the ball in his hands almost the entire time and hit a clutch reverse layup late to keep Kansas alive. Beyond that, he played the final 7:00-plus minutes with 4 fouls and did not pull back one bit.

8 – K.J. Lawson – Wasn’t afraid to shoot in the 6 minutes he was out there, which has become a staple of Lawson’s game and a big reason he’s been ready to contribute of late. But only one of the four shots he attempted went in.

There needs to be a stat for fouls drawn. Mitch is a master of offensive, just like a great point like Frank was. Putting people on the bench helps far more than scoring two points.

There is a fouls-drawn-per-40-minutes stat on KenPom, if you have a subscription.

Perhaps Lightfoot doesn’t draw blocking fouls much, but does seem to draw a lot of critical charges.

Good game by Q. Really liked his activity, and calling for the ball on his 3’s. I still would love to see him drive to the hoop more and draw some fouls. He’s very weak around the rim. The Referees tend to not reward that (call fouls).

Grimes is going to develop into a consistent winner - everything we wanted and expected of him. He needs to get stronger and more comfortable with Self’s offenses and defenses. It’s going to happen.