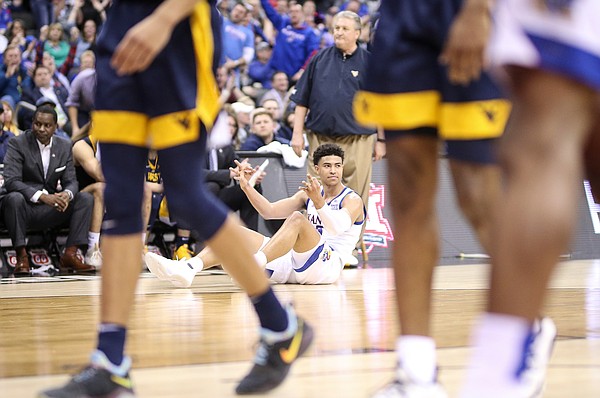 Kansas guard Quentin Grimes (5) signals three after being fouled on a made three-point attempt during the first half, Friday, March 15, 2019 at Sprint Center in Kansas City, Mo. by Nick Krug

1 – Quentin Grimes – His 5-of-5 shooting clip from 3-point range in the first half was the story and his confidence in other aspects of his game only grew from there. Finished with 18 points after a quiet first half, but added 8 rebounds and 3 assists to his point total during what was easily his best game since KU’s win over Michigan State in the season opener.

2 – Devon Dotson – Dropped in 13 points, 5 rebounds and 6 assists and had complete command of the game, on both ends, from start to finish. His dimes got others going all night and he turned it over just once, bringing his totals for the tournament to 10 assists and 1 turnover.

3 – Dedric Lawson – How about dropping in 24 points and 8 rebounds on 75 percent shooting and falling to third in the ratings? Lawson was great and he found creative ways to score. The fact that two guys on his team played even better is great news for this group.

4 – Marcus Garrett – Grimes’ 4-point play no doubt got this team going, but before that Garrett’s willingness to drive it hard to the rim played a huge role in helping Kansas find its flow. Finished with 11 points and 5 rebounds in 30 minutes.

5 – Mitch Lightfoot – Tallied as many blocks (4) as points and is really starting to be an every-game enforcer for these Jayhawks, with his total number of blocks for the tournament now sitting at 7... and counting.

6 – David McCormack – He wasn’t as good on Friday as he was on Thursday night, but, still, 7 points and 8 rebounds in 25 minutes will be a line KU coach Bill Self takes just about every time. The most important thing about his seven points was the fact that they came as a result of his work on the offensive glass, where he grabbed 5 of his 8 boards.

7 – Ochai Agbaji – Wound up with 9 points on 4-of-9 shooting and finished on a high note after another tough first half. The arrow is starting to point back up for Agbaji, though, and a big game in the final against Iowa State could send him soaring.

8 – K.J. Lawson – Tallied 2 rebounds and 2 fouls in just 10 minutes while splitting his time between the post and the perimeter in what was a classic whatever-the-team-needs type of night.

"Finished with 18 points after a quiet first half".... ?? I thought those pts he made mostly in the 1st half.

Saw and thought the same thing. That part needs a little editing.

Steve let's not quibble. Fact is Grimes was fantastic, not just the 3s, he really went out and played a game. Actually I think he played better all around than in the Michigan State game. I think this new lineup, and moving Dotson both inside and out, and Grimes handling the ball more is starting to click. No matter what happens against Iowa St. This team got a little of its mojo back. We win the tourney we might even up a 3 seed.

Roger that, Layne. Spot on. Grimes is no doubt has better court-vision than others, too. His defensive stance has improved, although sometimes team still hasn't communicated well in switching, especially when McCormack jumping all around from everywhere. He leaves his man open and doesn't get back in time. Grimes doesn't look lost anymore - that part we can see. But he still needs to finish those layups strong, he needs to finish those floaters with better form (he flicks wrist instead of pushing the ball up). Other than that, effort-wise, he's moving to the right direction!!