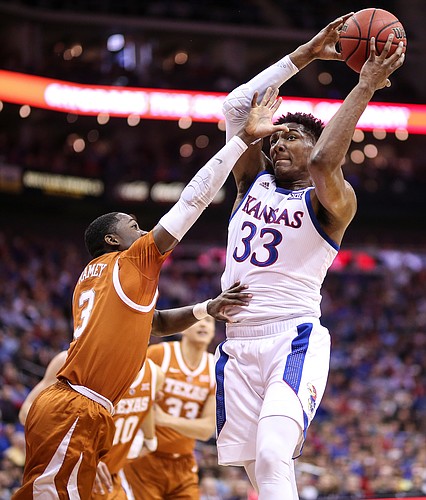 1 – David McCormack – Should’ve had a double-double in his postseason debut, but mishandled a late rebound attempt. That gaffe did nothing to spoil his effort, though, as the KU freshman poured in 13 points and 9 rebounds to help power KU past Texas.

2 – Devon Dotson – Made 6 of 11 shots, hit 4 of 5 from the free throw line and added four assists and zero turnovers to lead Kansas with 17 points. More games like that will take this team far.

3 – Dedric Lawson – Not his best game efficiency-wise, but Lawson had moments where he looked so smooth and so unstoppable, finishing with 16 points and 6 rebounds to go along with a block, two steals and six turnovers.

4 – Marcus Garrett – Five point and eight rebounds in 20 minutes and nearly all of them were big.

5 – Quentin Grimes – Hit 7 of 8 from the free throw line and grinded his way to 12 points and three assists in 33 minutes.

7 – Ochai Agbaji – The Kansas City kid wasn’t terrible in this one, but he looked a little skittish at times. Made just 1 of 5 field goals and finished with 2 points, 3 rebounds and 2 assists in 26 minutes.

8 – Charlie Moore – Did a little more — get it?!? — than his stat line of one rebound and one steal in 7 minutes suggests. Not much, but a little.

9 – K.J. Lawson – Played just 2 minutes and grabbed one rebound and nothing else.

Garret above Grimes and Lightfoot? Though Grimes had trouble making his shots, he had not trouble at all getting Texas into fall trouble. That was a bigger deal than not making baskets. It made Texas' defense play soft. Which open the lanes for Dotson, Mc and Dedric. Mitch's two stops causing time of possession turnovers and those blocks did the same to Texas' offense. You hardly saw UT guards try driving the lanes after that. Garret did get a lot of rebounds, but most were uncontested. I did love the way he went airborne to get one of them.

I would like Garret to start though. IMO, he can jump the highest of all our players. Maybe with him, we can win the tip once in a while.