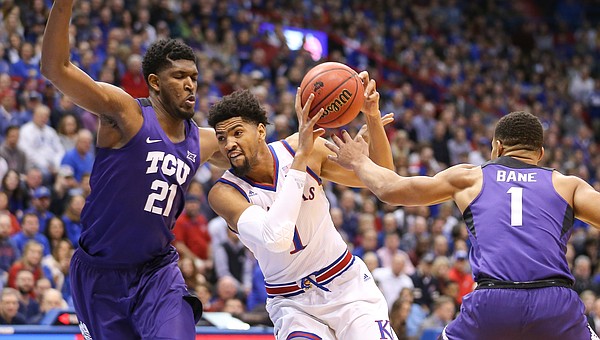 1 - Dedric Lawson – Dropped 31 points and 14 rebounds and played big and tough all night long. Shot 10 of 19 from the floor and even hit two 3-pointers, in four tries, while adding three steals in 35 minutes.

2 – Ochai Agbaji – The seven points and four rebounds only begin to scratch the surface on the freshman’s impact in this one. He played 25 minutes

3 – Marcus Garrett – Didn’t shoot great (just 3-of-8), but had a couple of key baskets, played his usual solid defense and did not commit a single turnover in 35 minutes, many of them as KU’s point guard.

4 – Mitch Lightfoot – Always known for his hustle and effort, Lightfoot took it to an even higher level on Wednesday and it showed. That’s leadership and a guy doing everything he can to help his team.

5 – Devon Dotson – Played big at the end but limited minutes in the first half. Not his best night by any means, but made some incredibly important plays down the stretch, none more highlight-worthy than his big time block of a driving layup attempt by TCU senior Alex Robinson.

6 – K.J. Lawson – Self said after the game that Wednesday’s effort was arguably K.J. Lawson’s best as a Jayhawk. Played hard, with energy, attacked the offensive glass and may have earned more minutes in the future as a result.

7 – Lagerald Vick – Even with all of the good things on his stat line — 50 percent shooting, 4 rebounds, four assists, 36 minutes — it’s hard to look past that ugly number in the turnover column — 6.

9 – Charlie Moore – Had an assist to Agbaji that came off of a steal of his own in 4 minutes.

10 – David McCormack – In a game that many expected to deliver big minutes with Udoka Azubuike out, McCormack played just one minute.

I like KJ's gutsy plays. He should shoot more 3s.

Looks like Legerand Vick maybe loosing playing time if doesn't start protecting the ball, and his defense has always been a little sketchy. Not a good combination for a coach that values both defense over offense.

LaGerald, your team wears blue, red, and white. Not purple, green or yellow.

It got to the point that as I was watching, I was cringing every time Vick got the ball. He's got to start hitting more from the outside again. We'll go up against a team with size that'll pack the middle if we can stretch defenses. We don't need threes to outscore with this team...we need threes from a more strategic sense.