Grimes tops ratings on a brutal day for No. 5 Kansas in 77-60 loss at Iowa State 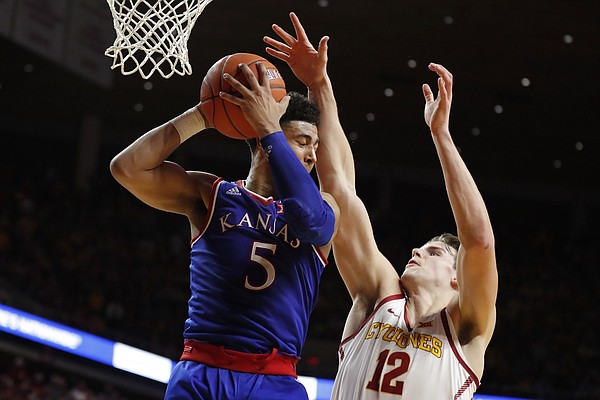 1 – Quentin Grimes – The only Kansas player who actually looked good in this one, Grimes finished with 19 points and six rebounds on 50 percent shooting in 31 minutes.

2 – Devon Dotson – Eight points, seven rebounds and three assists looked good. The five turnovers — of 24 for the team — did not. Still, Dotson was one of the few Kansas players who found any kind of success on Saturday.

3 – Marcus Garrett – Attacked the rim and seemed to have some understanding of what needed to be done. Didn’t do much in the way of making it happen, though.

4 – Dedric Lawson – Scored and rebounded but didn’t play strong enough and had a rough first half.

5 – David McCormack – Didn’t check in until late in the first half and didn’t play a ton overall. But did go all-out while he was in there.

6 – Mitch Lightfoot – Didn’t offer enough to make a real impact but also didn’t play enough to be responsible for too much of the meltdown.

7 - Lagerald Vick – Opened the game with three turnovers in the first few minutes and kept going downhill from there. Looked out to lunch way too much and again appeared to play with a me-first mentality at times.

9 – K.J. Lawson – Again played too little to move any higher in the rankings, although that nearly was a good thing for his chances at a higher ranking on Saturday. Doesn’t play more because he too often is unaware of what to do on defense.

I am waiting for a Lagerald Vick mixtape with a Benny Hill soundtrack.

As long as Vick is watching/listening from the bench. The far end of the bench. Time to move on from his lackadaisical incompetence.