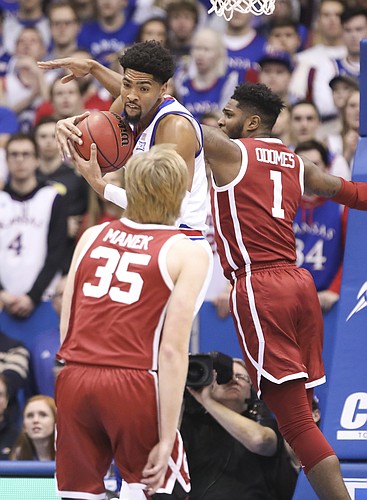 Kansas forward Dedric Lawson (1) pulls in a rebound from Oklahoma guard Rashard Odomes (1) and Oklahoma forward Brady Manek (35) during the first half, Wednesday, Jan. 2, 2019 at Allen Fieldhouse. by Nick Krug

1 – Dedric Lawson – Didn’t deliver good shooting numbers, but did deliver big time buckets and carried the Kansas offense for portions of this one en route to another double-double of 13 points and 15 rebounds.

2 – Devon Dotson – So good attacking and getting downhill, he put pressure on the Sooners all night and did not succumb to the ridiculous ball pressure he faced while running the show for KU’s offense. Scored 16 tough points and added 4 rebounds and 4 steals in just 27 minutes because of foul trouble.

3 – Marcus Garrett – Played hard and smart all night and set up teammates for easy shots and in the perfect position.

4 – Quentin Grimes – Grimes turned in a terrific first half and then resorted to making the same, old mistakes in the second, most notably rushing his shots. Grimes was 5-of-7 for 11 points in 15 minutes in the first half. For the game, he finished with 14 points and shot 1-of-6 from 3-point range.

5 – Udoka Azubuike – Tallied eight points and six rebounds in 14 first-half minutes. But that was by far the best part of his night. Sat for long stretches of the second half and KU looked good with him on the bench. Finished with 8 points and 9 rebounds to go along with 2 blocks.

6 – Lagerald Vick – Hit some clutch 3-pointers and played with an edge, especially after misfiring or making a mistake. Not nearly his best game, but KU doesn’t win without him showing them how to fight. 12 points, 4 rebounds, 3 steals and 4 turnovers.

7 – Charlie Moore – Way too out of control driving to the rim, when he should’ve passed more often than he shot. Also missed two important free throws late that gave OU life late.

9 – David McCormack – Got early opportunities in both halves, but wasn’t on and played just six minutes.

10 – K.J. Lawson – Checked in for a minute in the second half but was back on the bench before anybody could even realize he was out there.