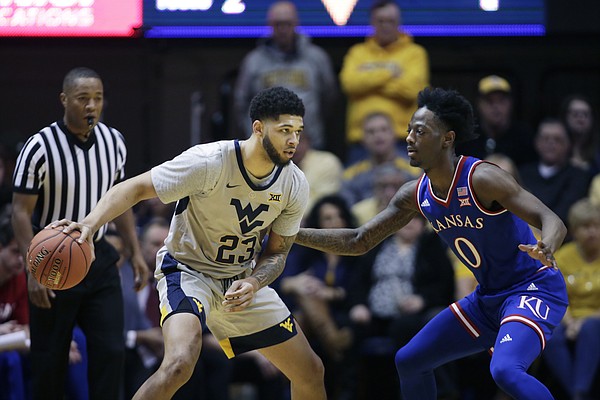 West Virginia forward Esa Ahmad (23) looks to make a pass while defended by Kansas guard Marcus Garrett (0) during the first half of an NCAA college basketball game Saturday, Jan. 19, 2019, in Morgantown, W.Va. by Raymond Thompson/AP Photo

1 – Marcus Garrett – Easily KU’s best, toughest and smartest player in this one. The sophomore from Dallas is coming alive offensively and his defense is as good as anybody’s in the country.

2 – Dedric Lawson – Nearly did enough to carry Kansas to a victory, recording most of his 15 points and 11 rebounds down the stretch. And he was good on the glass, where KU outrebounded WVU, 34-28, rom start to finish.

3 – David McCormack – Minute for minute, the big, bruising reserve forward’s time on the floor was as good as anybody’s. He gave the Jayhawks two points and four rebounds in 8 minutes and helped Lawson on the glass.

4 – Devon Dotson – The seven turnovers will take away a lot from this one, but he at least showed the right mentality and competed as hard as anyone.

6 – K.J. Lawson – Logged double-digit minutes again and made them count, sparking the KU offense to a couple of runs at different points in this one. He’s still not the type of offensive player he wants to be or thinks he is and the sooner the coaches can convince him of that, the sooner he could see an uptick in minutes.

7 – Quentin Grimes – Knocked in a couple of key 3-pointers and added two assists and two turnovers in 30 minutes. He has to become more than just a spot-up shooter, though.

8 – Ochai Agbaji – Self said after the game that this was the first one in which Agbaji looked like a player who just came off of a redshirt. It showed. And the freshman from KCMO played just four minutes as a result.

9– Mitch Lightfoot – Recorded one foul and nothing else in four minutes on the floor.

10 – Charlie Moore – Got a chance, didn’t do anything with it. Didn’t play again.