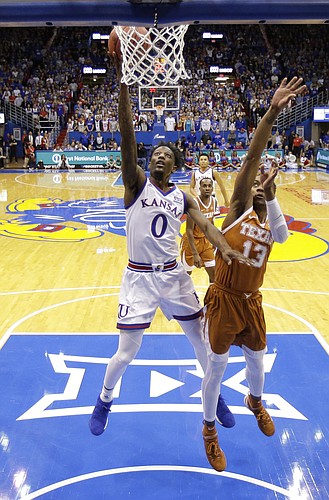 Kansas guard Marcus Garrett (0) gets past Texas guard Jase Febres (13) to put up a shot during the first half of an NCAA college basketball game Monday, Jan. 14, 2019, in Lawrence, Kan. (AP Photo/Charlie Riedel)

1 – Marcus Garrett – Added a serious dose of offense to his always-solid defensive effort and recorded a career-high 20 points on 8-of-11 shooting. Easily the best all-around game of his career and KU needed every ounce of it.

2 – Lagerald Vick – Led everyone with 21 points on 5-of-8 shooting from 3-point range and was ultra-aggressive going to the rim early in the game. His shot is back and his head appears to have come with it.

3 – Dedric Lawson – A quiet first half because of foul trouble gave way to what we’ve become used to seeing — the Kansas offense playing through Lawson and the KU junior putting up points as a result.

4 – Devon Dotson – Matched Texas, athlete for athlete, and tallied 10 hard-earned points to go along with five rebounds and five assists. More important than any of those numbers, though, was the big ZERO in the turnover column.

5 – Ochai Agbaji – Easily his worst of the three games he’s played, but we’re founding out that Agbaji at his worst is still better than a lot of people at their best. Four points, four rebounds, 2 assists and a steal in 25 minutes. He once again was out there at the end and, after the game, KU coach Bill Self tossed around the T word — trust — when talking about what he likes most about Agbaji.

6 – Quentin Grimes – Made 2 of 5 from 3-point range, including one in the opening minutes of the game, but did little else and had one of KU’s four turnovers.

7 – David McCormack – Made his eight minutes count with pure effort and even a little polish. Grabbed three offensive rebounds and scored what turned out to be a big bucket inside during the second half.

8 – Charlie Moore – Missed his lone shot in three minutes, but did set up Mitch Lightfoot inside with a nice dime.

9 – Mitch Lightfoot – Missed the two free throws that came from Moore’s would-be assist and recorded one foul in 6 minutes.

Great to see Marcus get his shot to drop. Somehow, we've got to get Q going and at least something from the bench. Charlie in particular is too good to be putting up goose eggs.

Charlie isn't a great defensive matchup. Switching him on weaves and screens is trouble.

I thought that Grimes might have a big game against his Texas friends. Not to be.