It was Mitch Lightfoot Night at Allen Fieldhouse 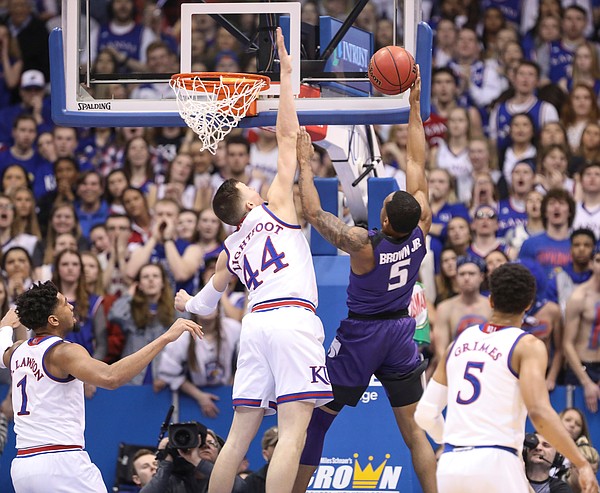 Kansas forward Mitch Lightfoot (44) gets up to block a shot from Kansas State guard Barry Brown Jr. (5) during the first half, Monday, Feb. 25, 2019 at Allen Fieldhouse. by Nick Krug

1 – Mitch Lightfoot – The heart and soul of the Kansas bounce-back, Lightfoot did what experienced players know how to do when their team needs a monster effort and faces a must-win. His numbers were good. His attitude was immaculate.

2 – Dedric Lawson – Twenty-one shots be damned, Lawson’s final numbers — 18 points, 14 rebounds, 5 assists — were huge and were a direct reflection of his desire to find redemption after a subpar game in Lubbock, Texas, over the weekend.

3 – Devon Dotson – His defense on K-State guard Barry Brown Jr., (4 points and 2 turnovers on 1-of-8 shooting) was good enough to earn him consideration for the top spot. He added 16 points and 3 assists on top of it.

4 – Quentin Grimes – A lot of nights, Grimes’ game would’ve been top-three worthy. But on this night, when his teammates did so much to help KU’s cause, Grimes’ 4-of-8 shooting performance and willingness to dive all over the floor and play with an aggressive edge, was merely the latest in an example of what the freshman guard can be when things are clicking. He had more bounce and played with better poise than in most games this season and the stat sheet showed it.

5 – Marcus Garrett – Even if he did bank one of them in, Garrett’s 2-for-4 showing from 3-point range was huge and his 4 rebounds and 2 steals came at just the right time. It was the second solid game in a row for the sophomore guard who missed five games with an ankle injury.

6 – Ochai Agbaji – Took just one shot and missed it, while adding 3 rebounds and 1 turnover in 16 minutes. Never looked overmatched, just didn’t look like he was in the form we’ve come to expect.

7 – Charlie Moore – Drained a 3-pointer — that was set up by an offensive rebound and an assist from Lightfoot — and also dished 2 assists in 8 minutes. Still had a couple of head-scratcher moments, but none of them hurt KU’s bottom line.

8 – K.J. Lawson – After an uptick in minutes and importance during recent weeks, Lawson played just 9 minutes and finished with 3 rebounds, 2 fouls and a turnover.

9 – David McCormack – Started his fifth consecutive game but played just 7 minutes because of the big night by Mitch Lightfoot.

Loved that Grimes was on the floor getting a loose ball turnover with a minute to go.

Also loved that Coach talked to Dotson about not attacking at the end of the half with a big switched on to him, then just a few minutes into the 2nd half he got Wade switched onto him and took him to the basket for a layup.

Why does David McCormack start? I know he's needed to help spell others and I also believe he will eventually develop into a good player. But I am absolutely baffled as to why HCBS continues to start him and play him through the first media time out, or so.

My only guess is that it's a morale thing. Like, "hey, I know you're not getting a lot of minutes, despite the fact that we're down a couple of big guys we were counting on having, but you are a starter! So there's that!"

I believe that Lightfoot is better coming off the bench and Self wants to start out with 2 bigs. Especially with Garrett healing. I think sometimes we read too much into starters. The 2nd half starters and finishers are where we find out who Self wants on the floor.

He only played 7 minutes, so it doesn't really matter. Mitch is too hyped at beginning of games and will pick up early fouls. Also, Mitch is tiny and Lawson seems to have about a 2-inch vertical so Self needs someone who can at least make the jump-ball competitive.